Bucketloads of dough are poured into designing cars, trucks, and motorcycles annually. In marrying such lofty elements as “design language,” brand heritage, buyer motives, production practicalities, manufacturing costs, and other factors, the products’ final form is always a balancing act by the time it reaches the showroom floor. After the evolution from cocktail-napkin sketch to on-sale-in-your-dealership, some products succeed—maybe due to their purity of mission and lucky timing—while others, perhaps sad and confused “committee” designs, turn out homely or miss the mark entirely. No varnish here: This article shares our worldview about the best-looking bikes in key market segments. Love them or hate them, but here are our opinions. By all means let us know if you agree…and also if you don’t! We love abuse.

Retro is all about honoring a past point in time. And to do that, one should be a student of motorcycle history. With its lithe English Harris-designed frame and British Rockers-era styling cues, Royal Enfield’s Continental GT 650 gets it done. A lovely overall look has much to do with tidy, balanced proportions, and this café racer got them right. The bread-loaf fuel tank, trim bum-stop saddle, and air-cooled parallel-twin engine offer approximately equal “visual mass” (our term) tied nicely together with the lightweight frame, conventional fork and twin shocks, and spoked wheels. Altogether, the look is balanced, retro, sporty, kinetic, and authentic. 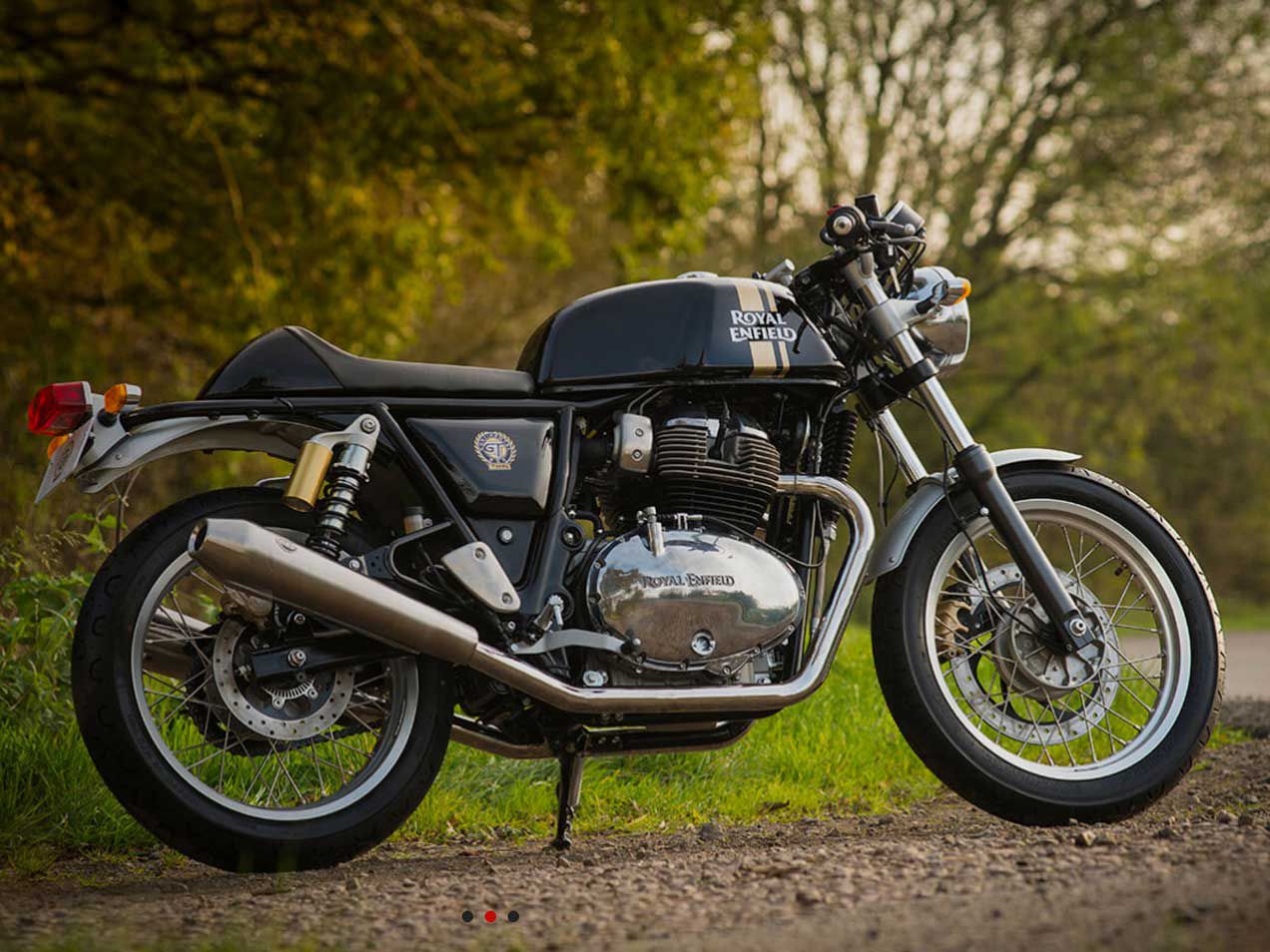 General Motors’ late design chief Bill Mitchell famously used a mako shark as the design inspiration for the third-generation Corvette. As a bike guy, he’d be thrilled to imagine Ducati’s Panigale V4 S, a shark among motorcycles. Stretched tightly around the alloy perimeter frame, the bodywork is simultaneously muscular and voluptuous, with sharp character lines and gentle curves flowing from the beak of its fairing through the body sides with its gill-like radiator vents. Here the body pauses to allow an unfettered cockpit for the pilot, and then finishes with a sharp flourish in back—like the flick of a shark’s speedy caudal fin. 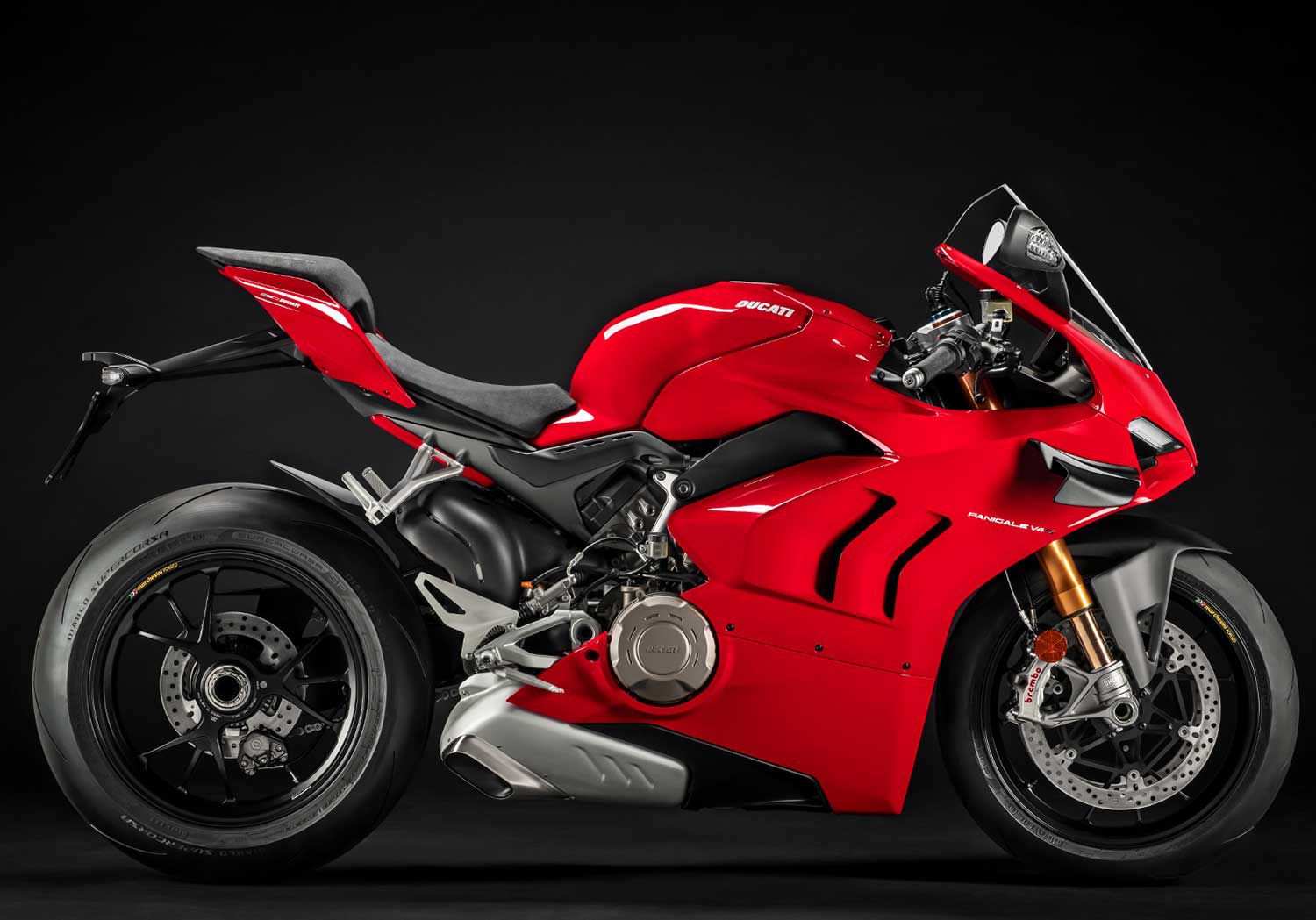 Honda’s third-generation Africa Twin has a powerful visual presence. We admit, some of this is due to the blue, white, and red paint scheme, which is reminiscent of the Rothmans-sponsored Paris-Dakar NXR750s of the late 1980s. That said, the Africa Twin excels and its design, to warp Jay Leno’s Leading with my Chin book title, well, the Africa Twin leads with its big 21-inch spoked front wheel instead. When fitted with a DOT-legal knobby tire, it sets the tone for the bike’s real purpose…mastering long stretches of primitive roads at high speed. Big and bulky, but beautifully effective when you don’t know what’s coming next. 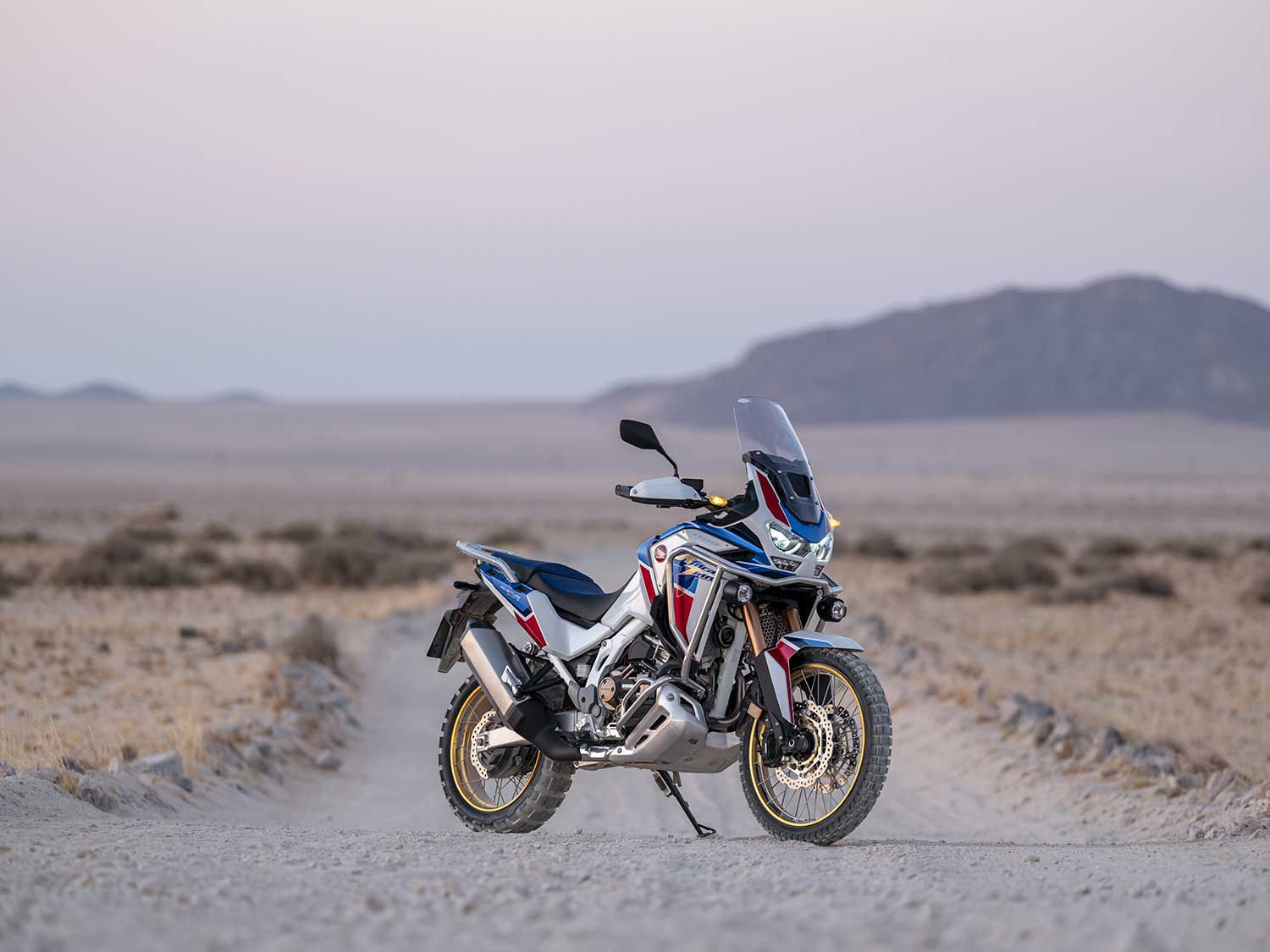 It took KTM to pull the dual sport segment out of the doldrums and into an exciting new space. Instead of offering middling street/trailbikes built down to a price, KTM’s EXC-F bikes are built up to a performance standard approaching that of purebred motocrossers. Herein lies a raw, purposeful beauty that rarely wears both knobbies and a license plate, and the 500 EXC-F has both. Then, the Six Days package layers on works-style graphics and a more comfortable seat that, if they could talk, would beg you—no, demand—that you climb aboard, thumb the start button, and ride. We feel similarly about KTM’s motocross equivalent, the 450 SX-F Factory Edition. 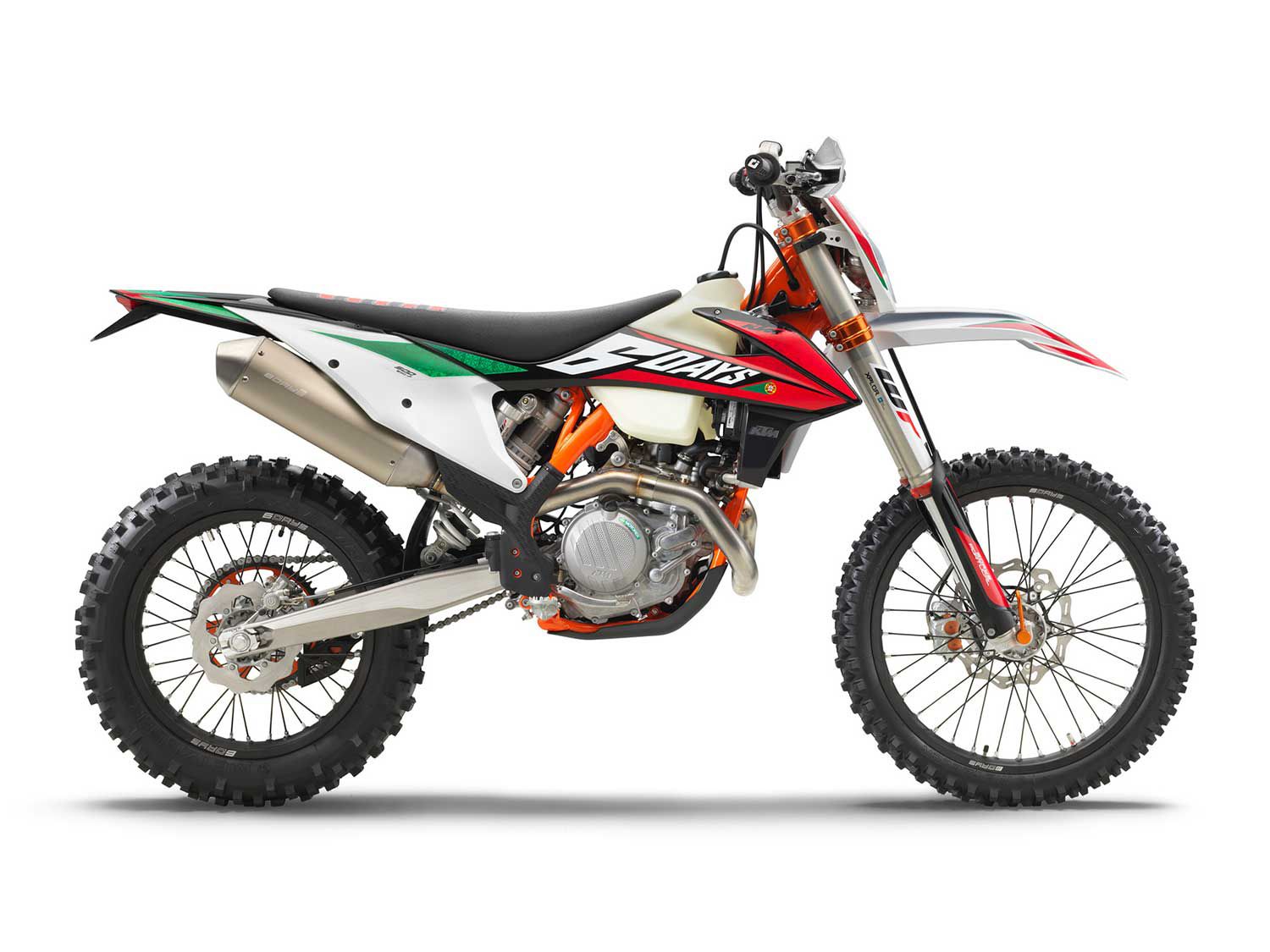 How often do you wish bike companies would listen and respond? KTM did, and the result is the most functionally and visually adroit dual sport yet, the 500 EXC-F Six Days. (KTM/)

The old 1963 song, “The Bird’s the Word,” should be replaced by a new one called, “The Battery’s the Word.” No, wait, that’s just dumb. Anyway, the fact remains, all eyes in mass transit are on electric vehicles. So far, however, few bikes have managed large production numbers, but among those Zero has perhaps done best. Yeah, there’s no engine, but this “motorcycle” preserves the all-important rider interface via agreeable handlebar, seat, and peg positions, making it a joy to ride instead of forcing the rider to adapt to the bike. Do we think the Zero SR/F is beautiful? Not especially! But per the German term “Bauhaus,” which generally embraces minimalism and “form follows function” modernism, it’s a stunner. 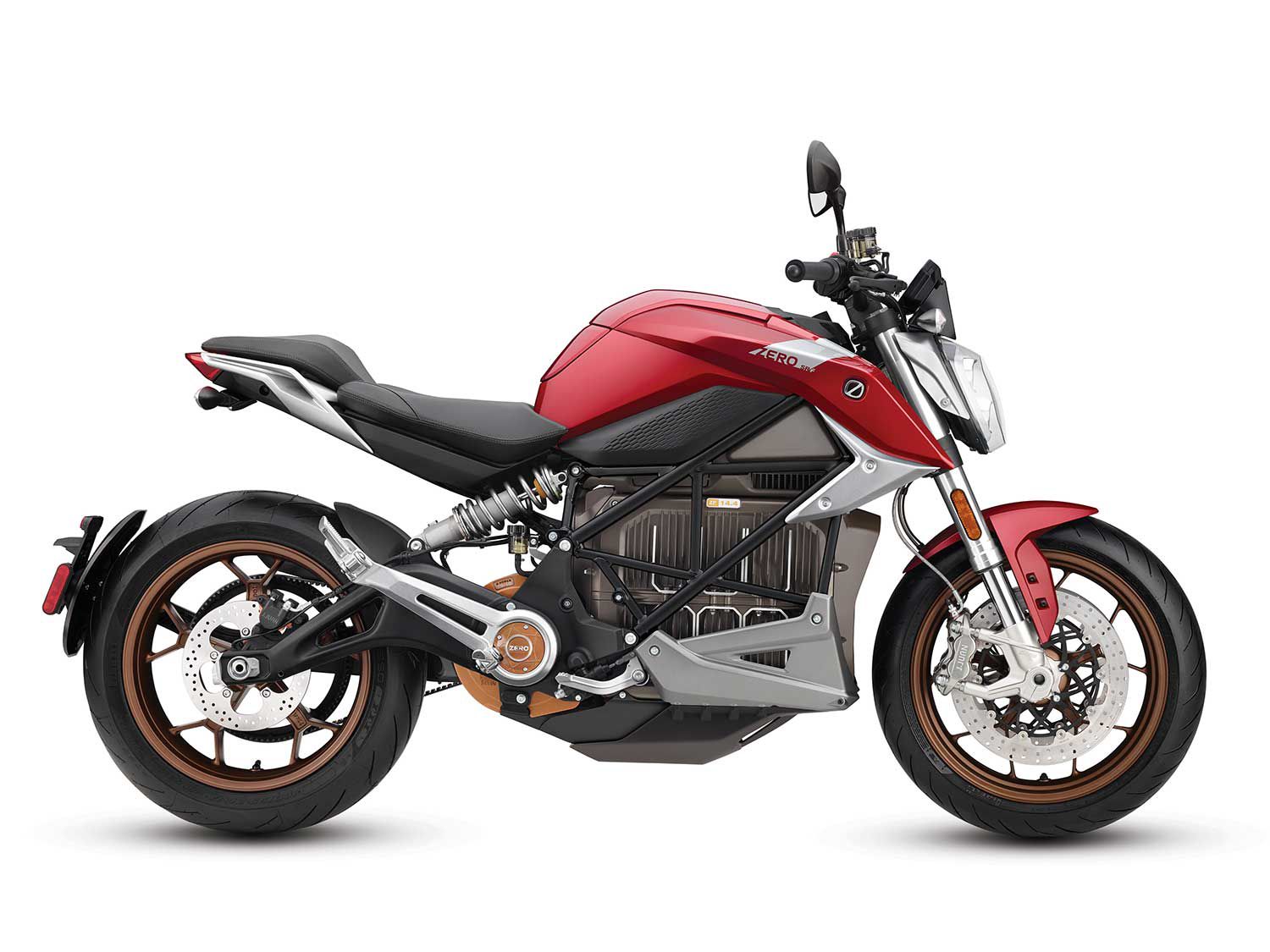 Like a certain magazine centerfold, we can’t stop looking at the Indian FTR 1200 S. A marriage of V-twin muscle, low-slung power-cruiser stance, and a heaping dose of flat-track racer, this new model from the rebooted Indian brand also partly channels century-old boardtrack racers to stylistically knock other cruisers over the hay bales and off the track. For Harley, whose KR750s and XR750s once dominated on racetracks and also visually, the FTR 1200 S is a punch in the eye, reminiscent of Henry Ford II’s knockout blow to Enzo Ferrari at Le Mans. Agile and taut lines, purposeful and muscular where it needs to be, and lean everywhere else, the FTR 1200 S is that same KO punch. It is a peculiarly American mindset that touring bikes must be as big, tall, and bulky as Conestoga wagons, which were probably the original American touring vehicle. European countries, and the tiny islands of Japan, certainly don’t see things that way. As a result, we think an evolved version of touring, Kawasaki’s Ninja H2 SX SE+, is an exciting proposition. Its 130,000-rpm supercharger-fed engine, sportbike profile, fuller-coverage windshield, stylized accessory hard bags, and athletic sport-touring riding position make it both visually and physically sensational. Accordingly, its dynamic bandwidth is so much broader than a typical touring sled’s too. Go-go Gadget! Fifty years ago, Honda’s “Mini Trail“ name aptly described the original 50cc Trail 50. It was a pocket-size bike with folding handlebars, a three-speed gearbox, and a headlight and taillight. Although street legal, most Trail 50s probably plied backyards, dirt lots, or campgrounds instead. Fast-forward to the Monkey and the name once again describes perfectly what this little bike’s supposed to do: monkey around. Despite its 2-1/2-times larger 125cc fuel-injected engine and disc brakes, Honda managed to capture the look and soul of the beloved original Mini Trail. As a result, one look and you’re entranced by the ’60s and the promise of adventure when you step aboard. And then, it delivers. Perfect. 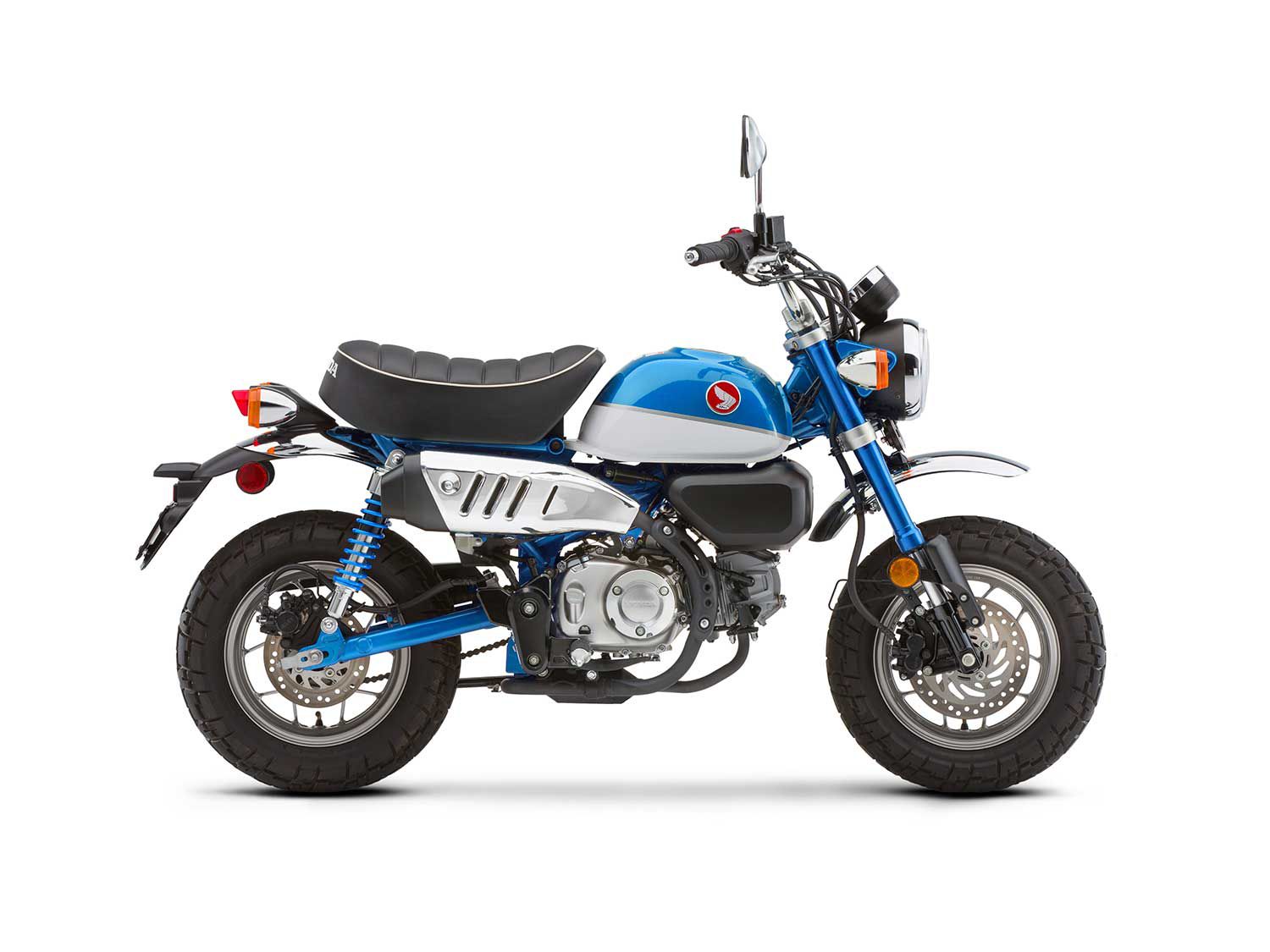