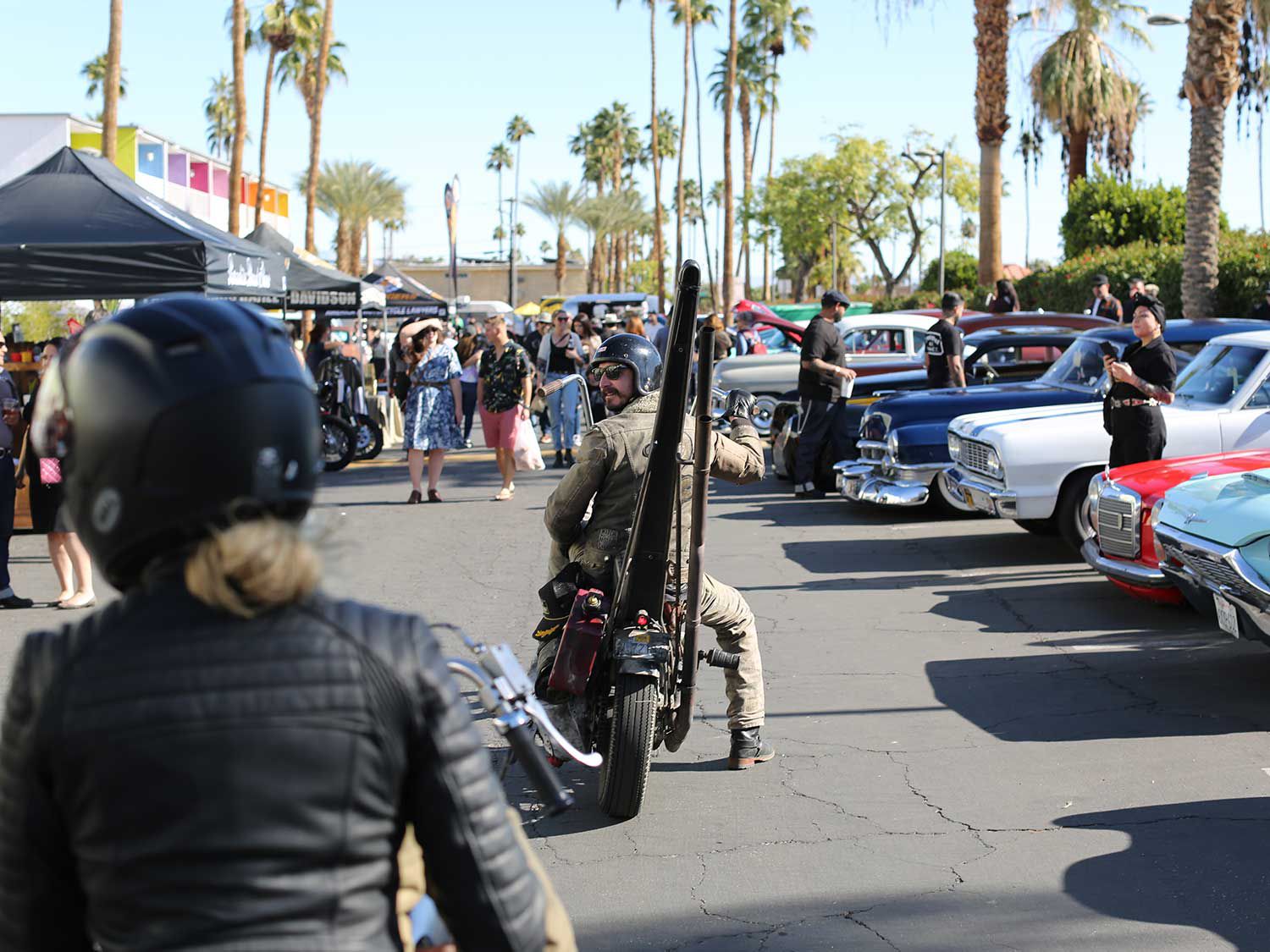 The city of Palm Springs alone is a bit of a time warp. Bring in a show’s worth of hot rods, classic cars, and vintage choppers, add the crowd that just rode and drove in on these relics, and hell, you’d think you’re right back in the glory days. The Paradise Road Show, now in its fourth year, brings in cars and bikes from all reaches of California, from older collectors to modern builders and everything in between, to the desert city of Palm Springs, California, for a weekend of sun, libations, and appreciating some top-shelf machines. 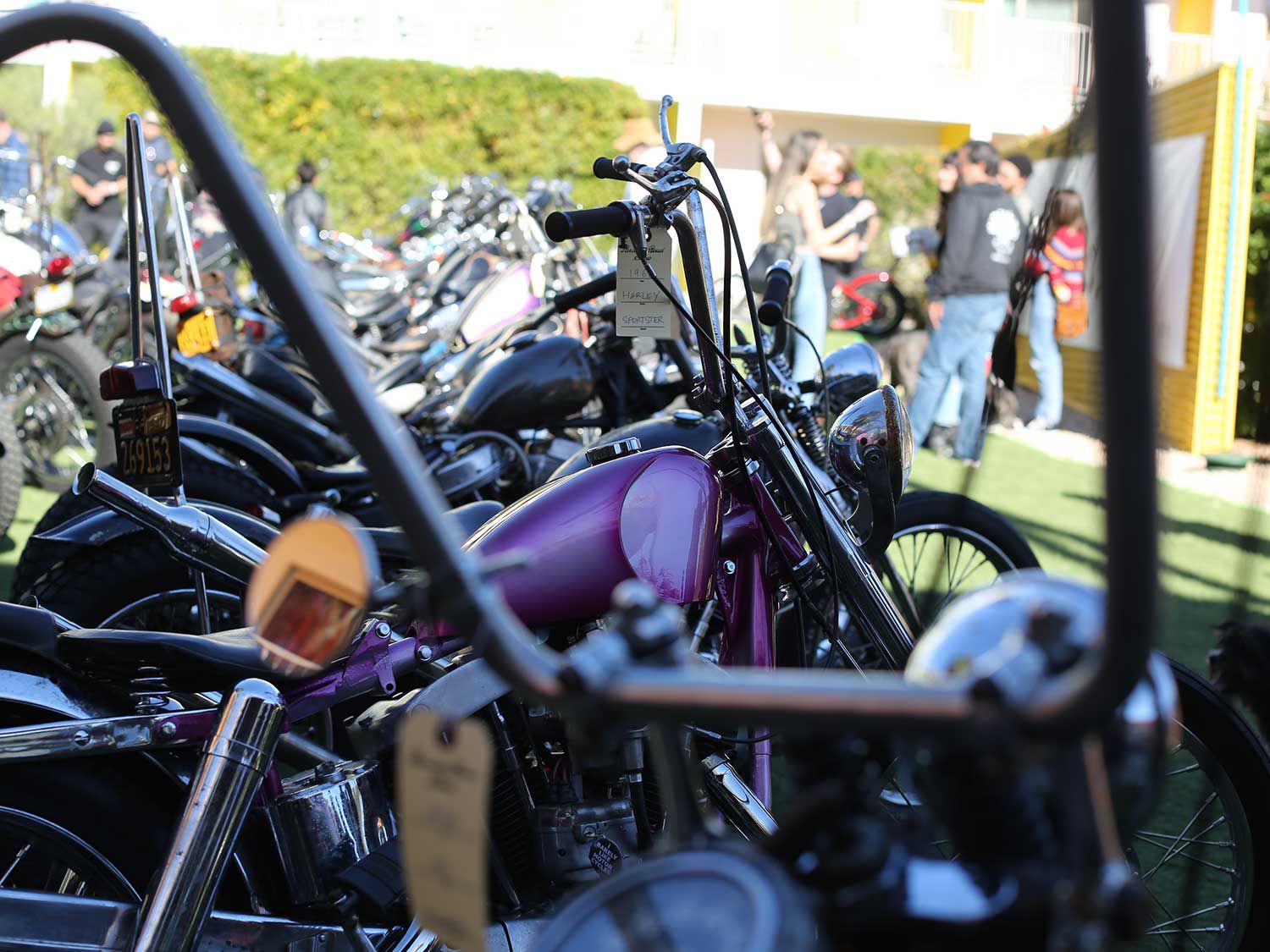 A swingarm Ironhead with a molded tank in the showbike lineup at Paradise Road Show. (Morgan Gales/)

As you pull into the Saguaro hotel, hot rods and classic cars line the main parking lot. There’s a guy selling moonshine—real moonshine, I checked, out of the back of his rat rod truck. A long line of custom vans had people partying and hanging out inside, more cars lined the wall opposite a dozen vendors selling vintage clothing, art, and decorations, and a couple of DJs sat at the end. Through the lobby and into the hotel, photographs were displayed along with some more vendors and a full room of tattoo artists as you walked out to the bikes by the pool. 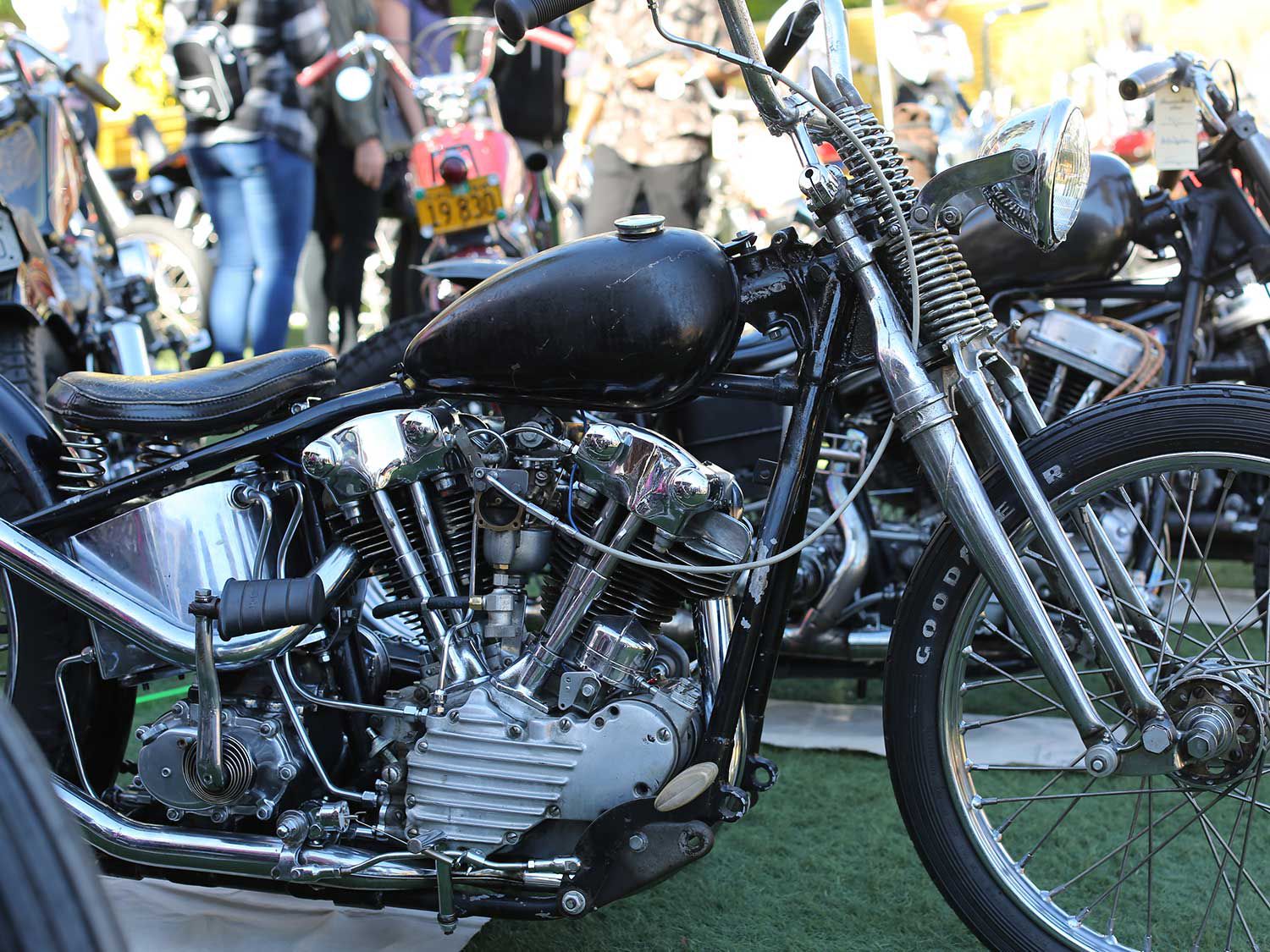 Spread out over the main lawn, each with a nice little cloth under it to soak up the inevitable drips of oil, were the bikes of Paradise Road Show. There were polished showbikes, molded, leafed, and flaked to perfection, next to ratty choppers with flaking paint exposing spots of rust and well-worn paths of oil snaking their way down to the ground. The selection of bikes was varied and well curated—nothing cheesy—and there were a lot of riders and some really incredible two-wheeled pieces of art. At the end of the weekend, Al from Blackboard Mfg. took home the Best in Show Award with his immaculate ’56 Shovelhead chopper. 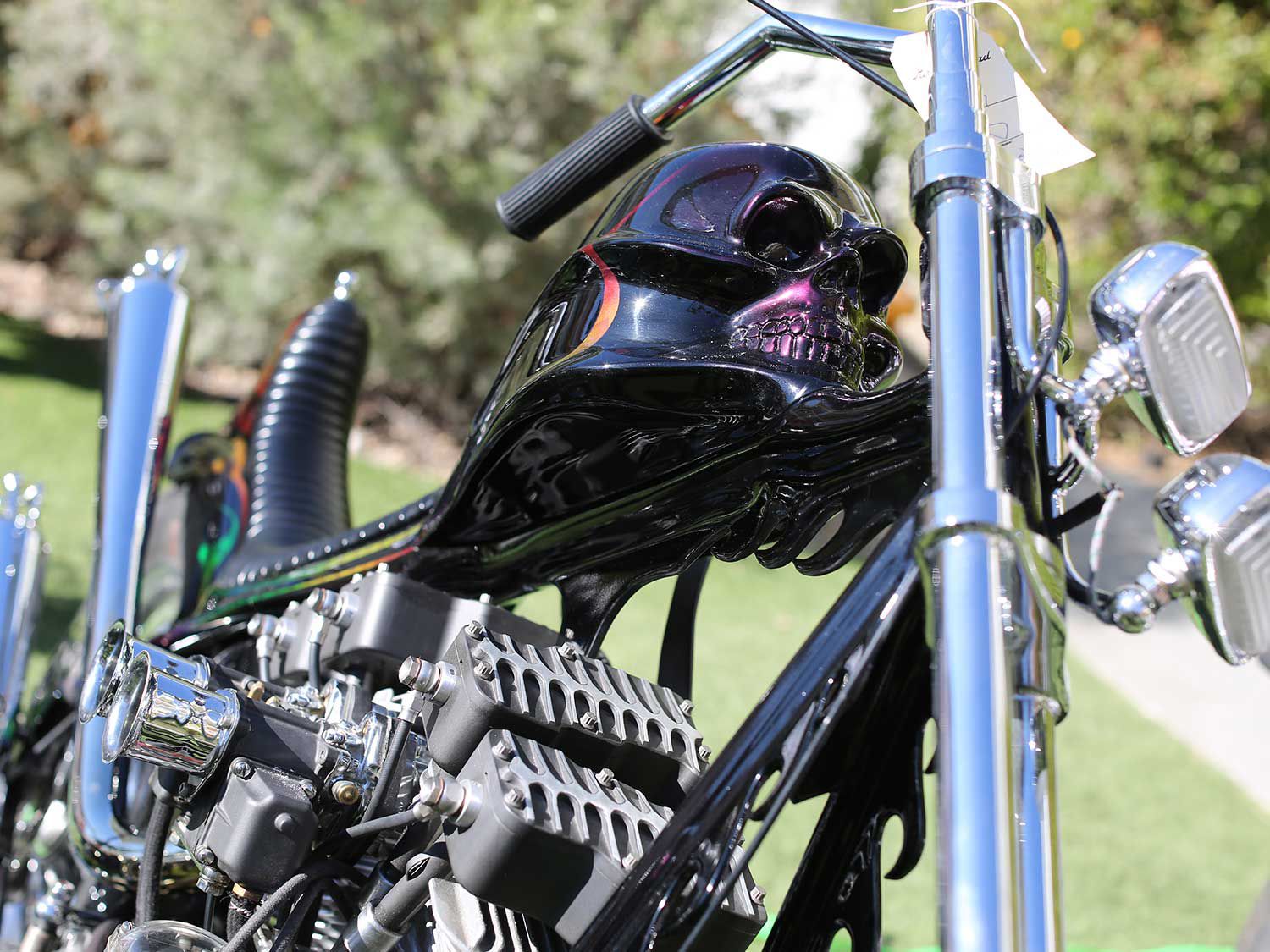 Head over to paradiseroadshow.com for more information on next year’s show. 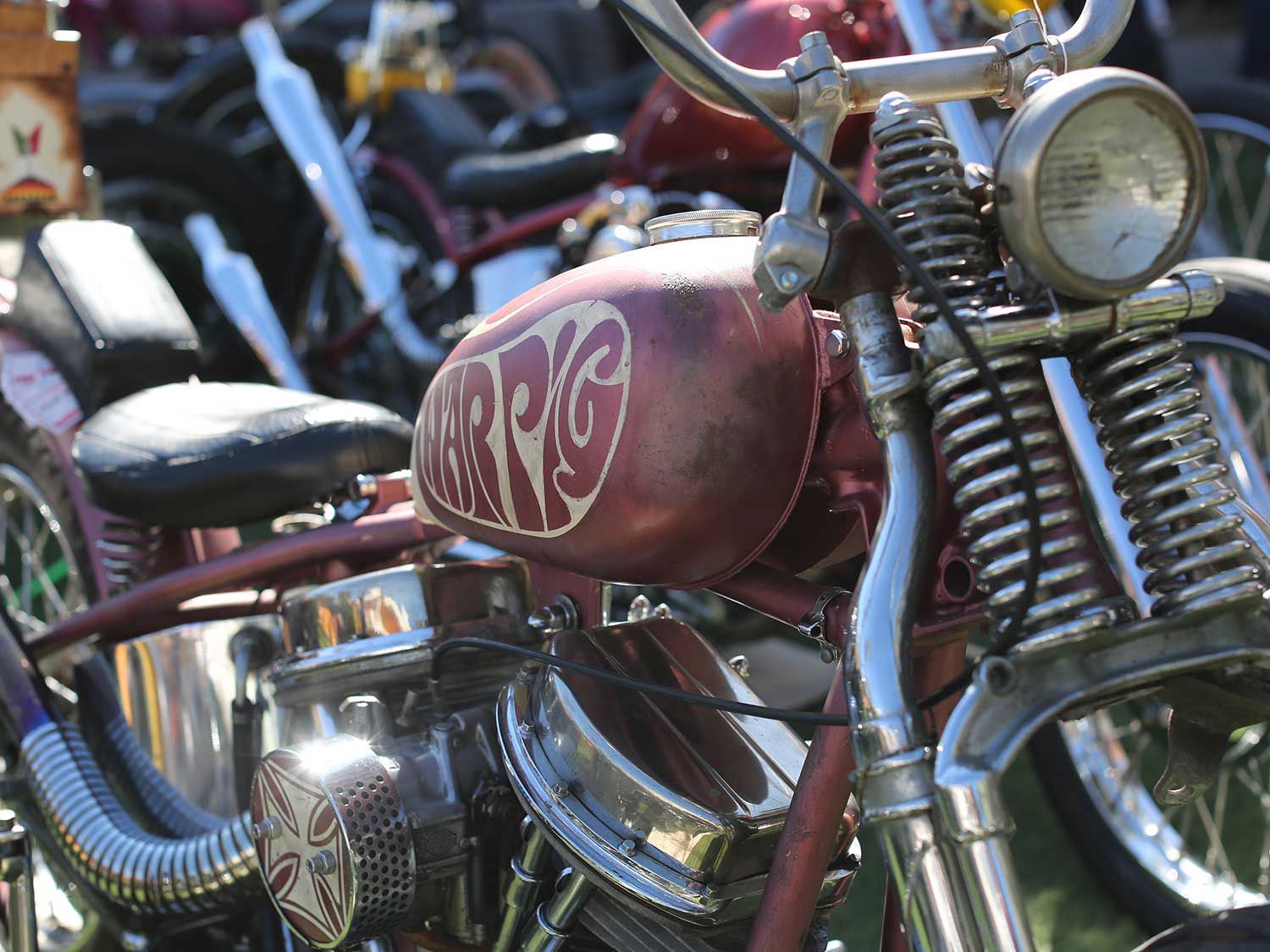 @howlinwolftattoo rode down from Whittier on the War Pig chopper. (Morgan Gales/) 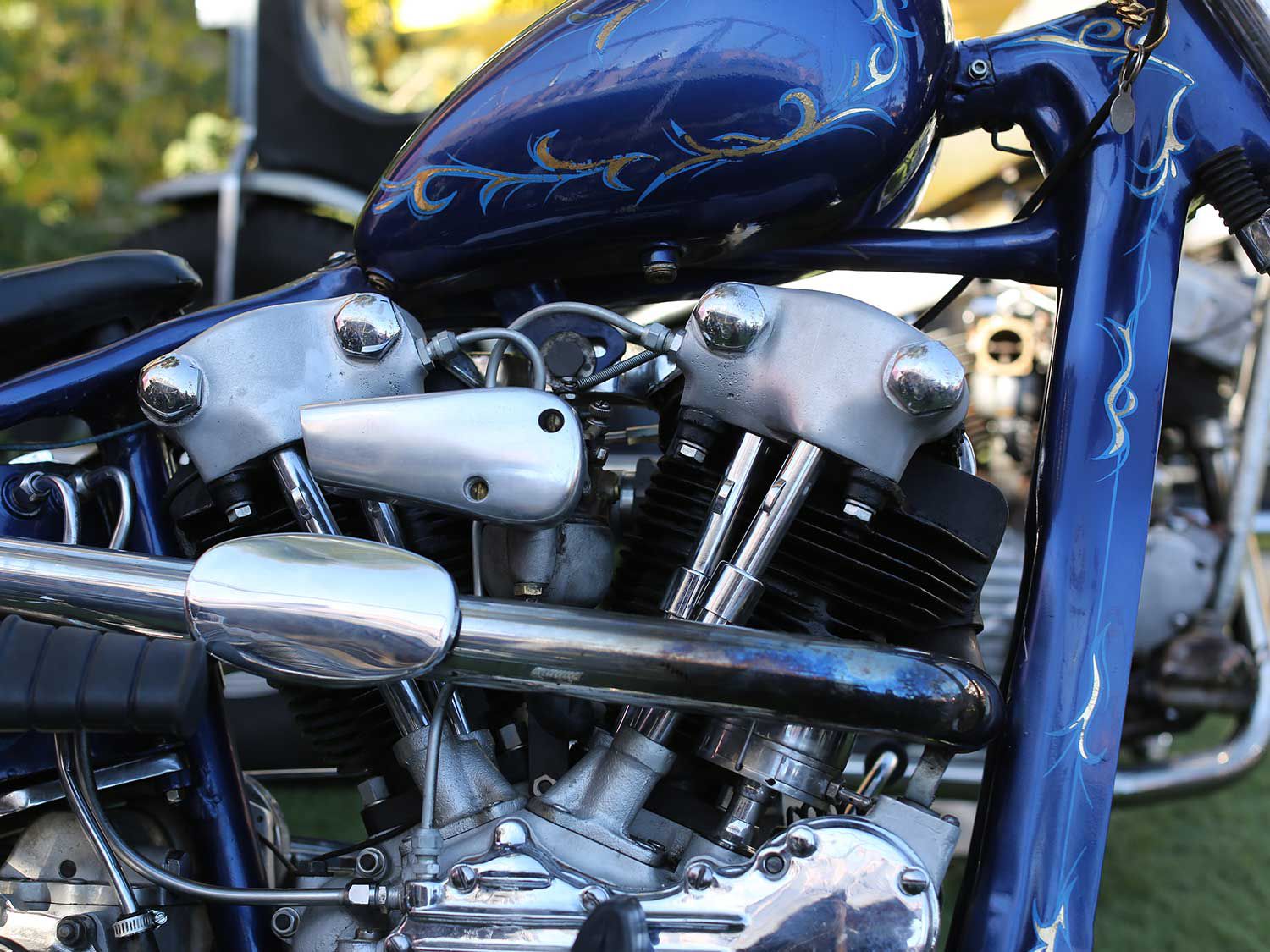 Passed out with the kid’s seat next to him, but he made it to the show and his car looks great. (Morgan Gales/) 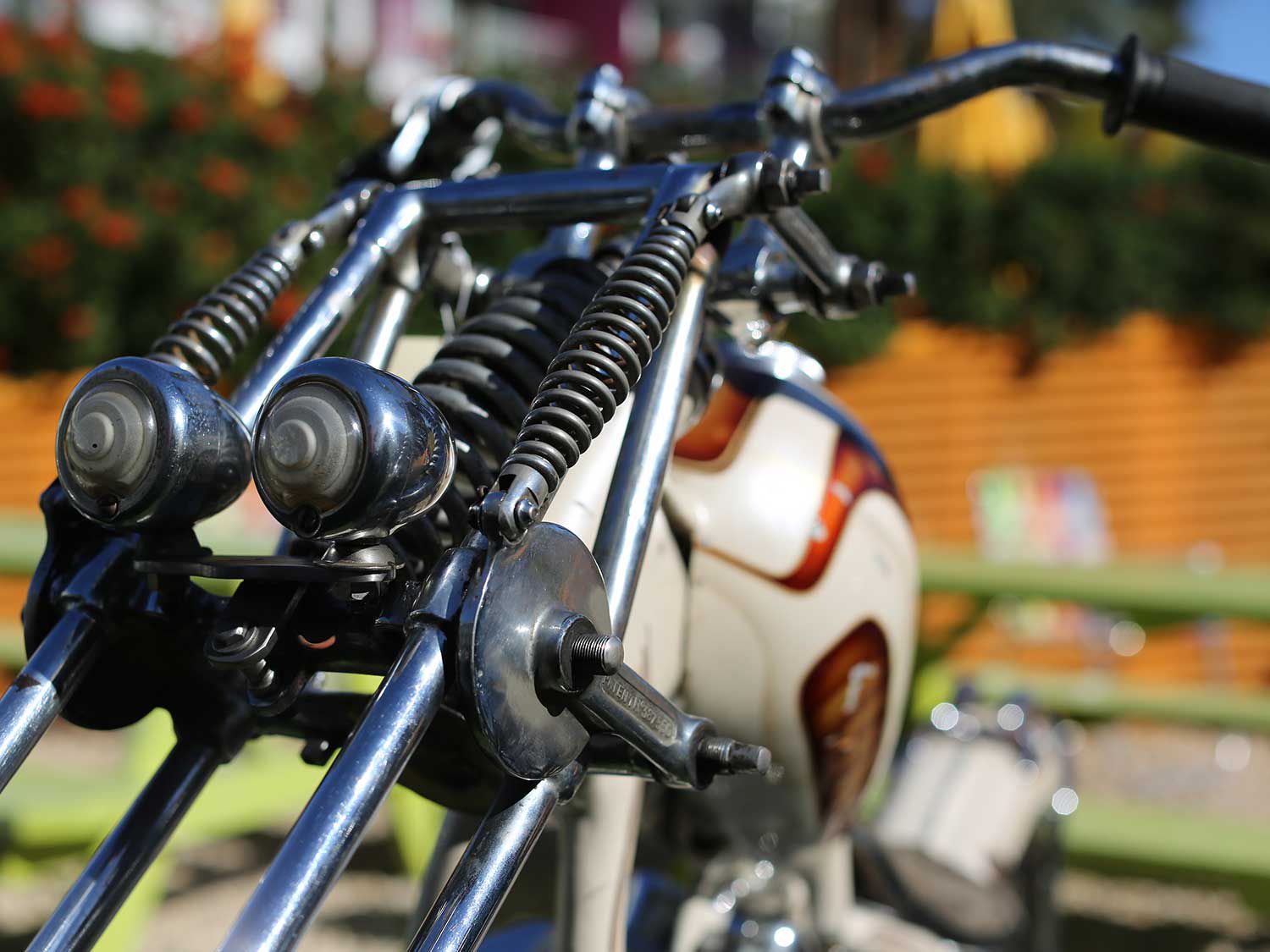 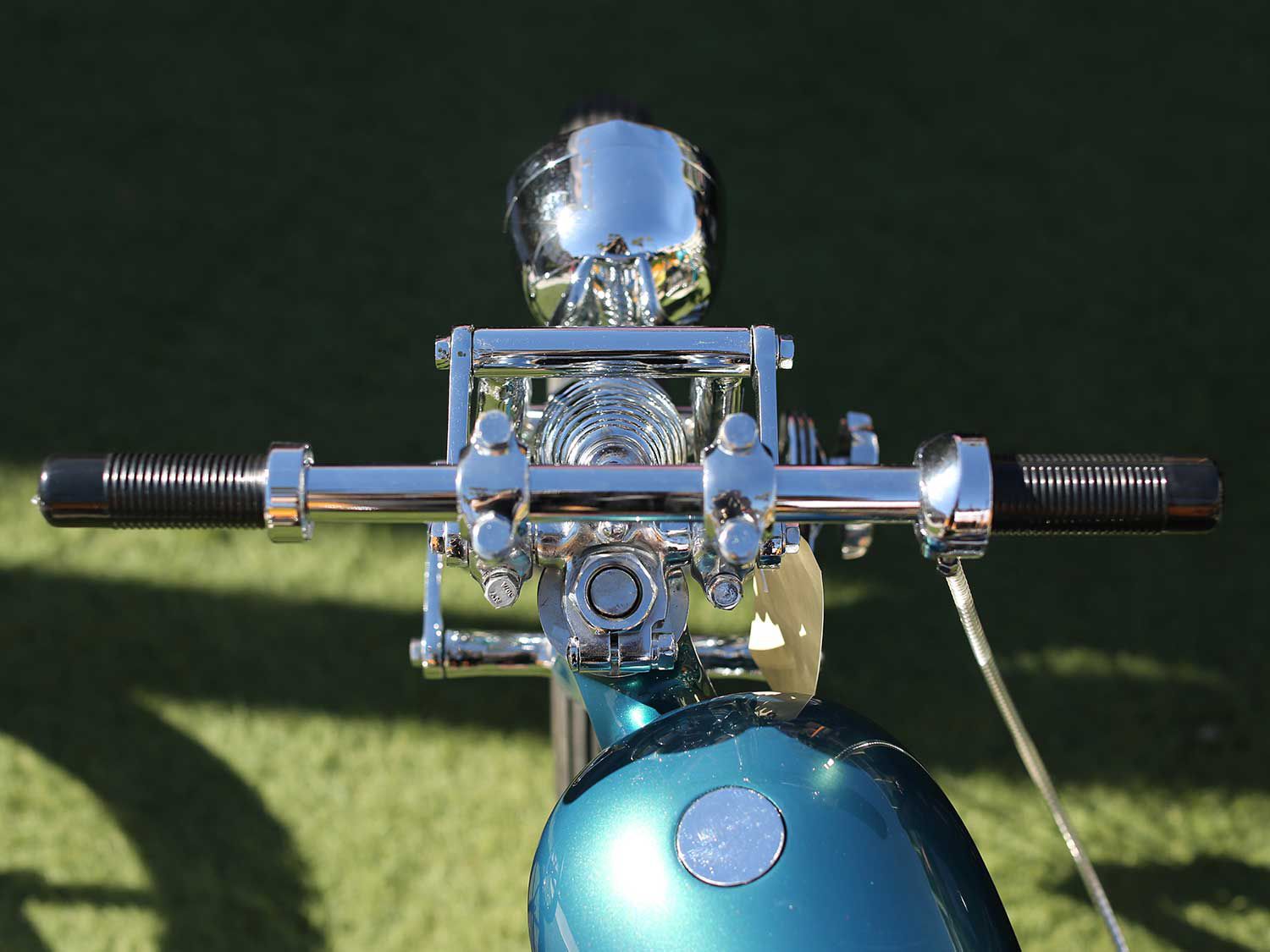 A clean and polished handlebar and front end setup on this skinny Panhead chopper. (Morgan Gales/) 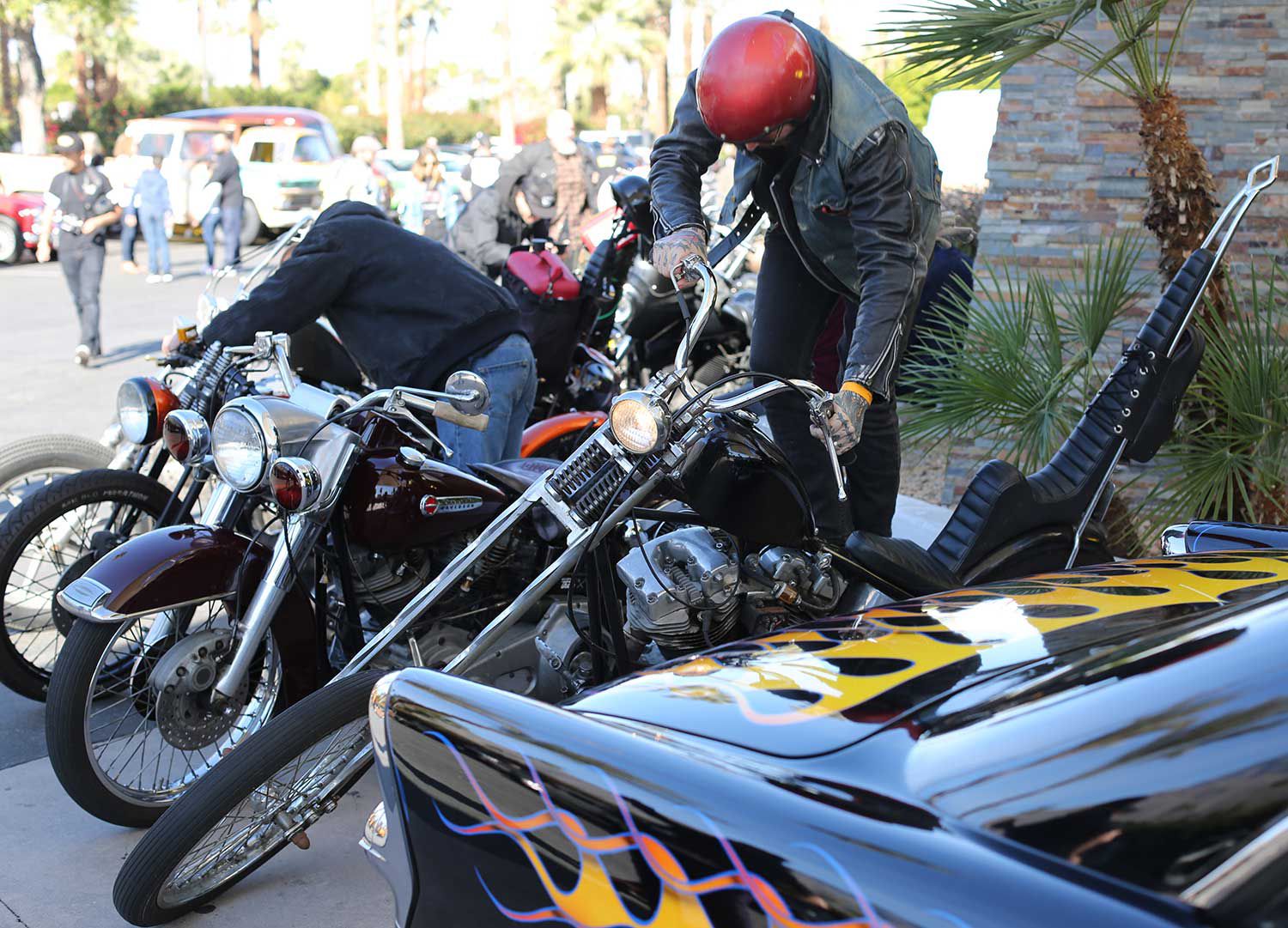 This tall Shovelhead chopper was one of our favorite ride-in bikes of the day. Tall, clean, and looked great going down the road. (Morgan Gales/) 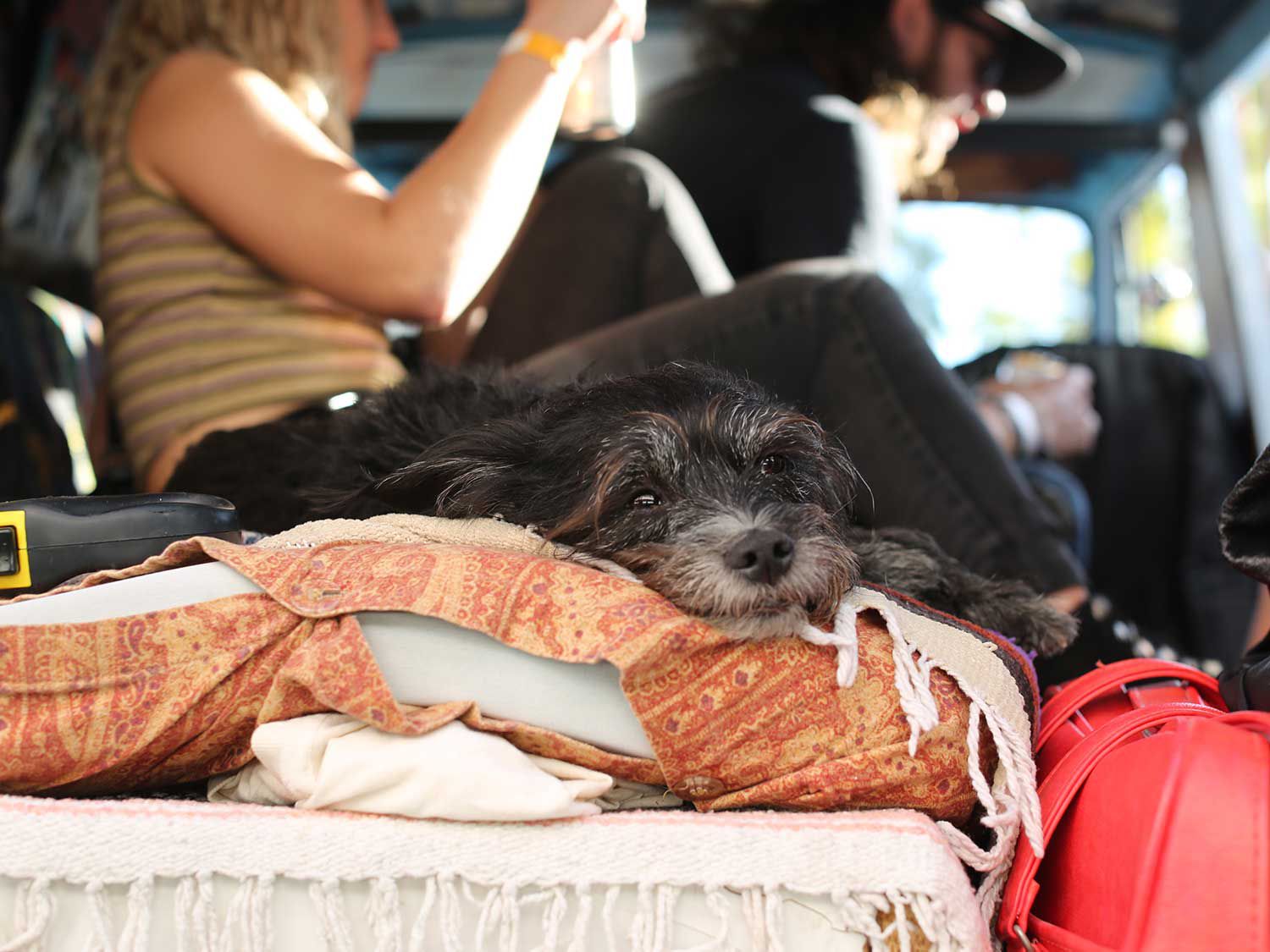 Best Boy in Show resting in one of the custom vans. Paradise Road Show is family and pet friendly! (Morgan Gales/) 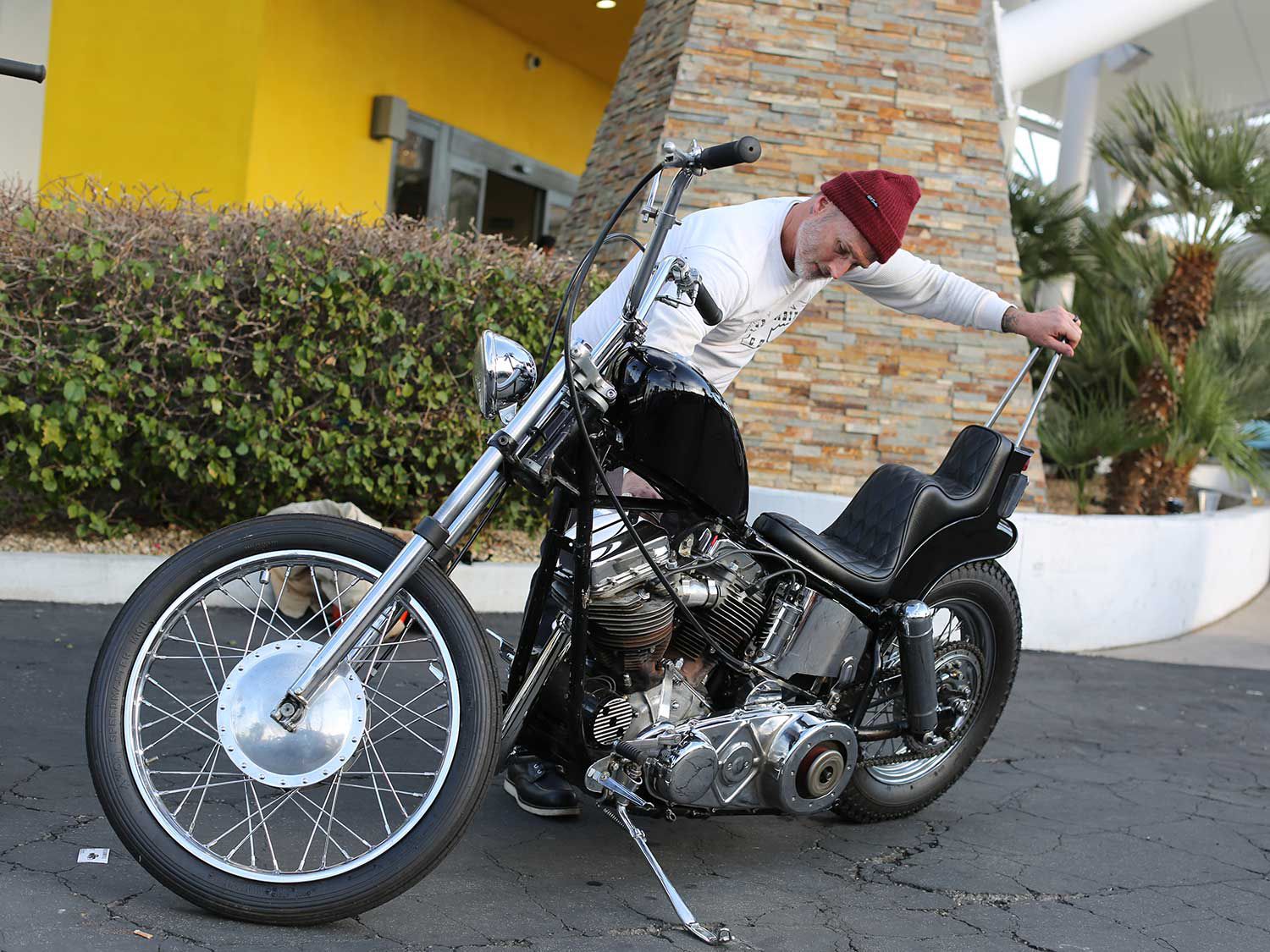