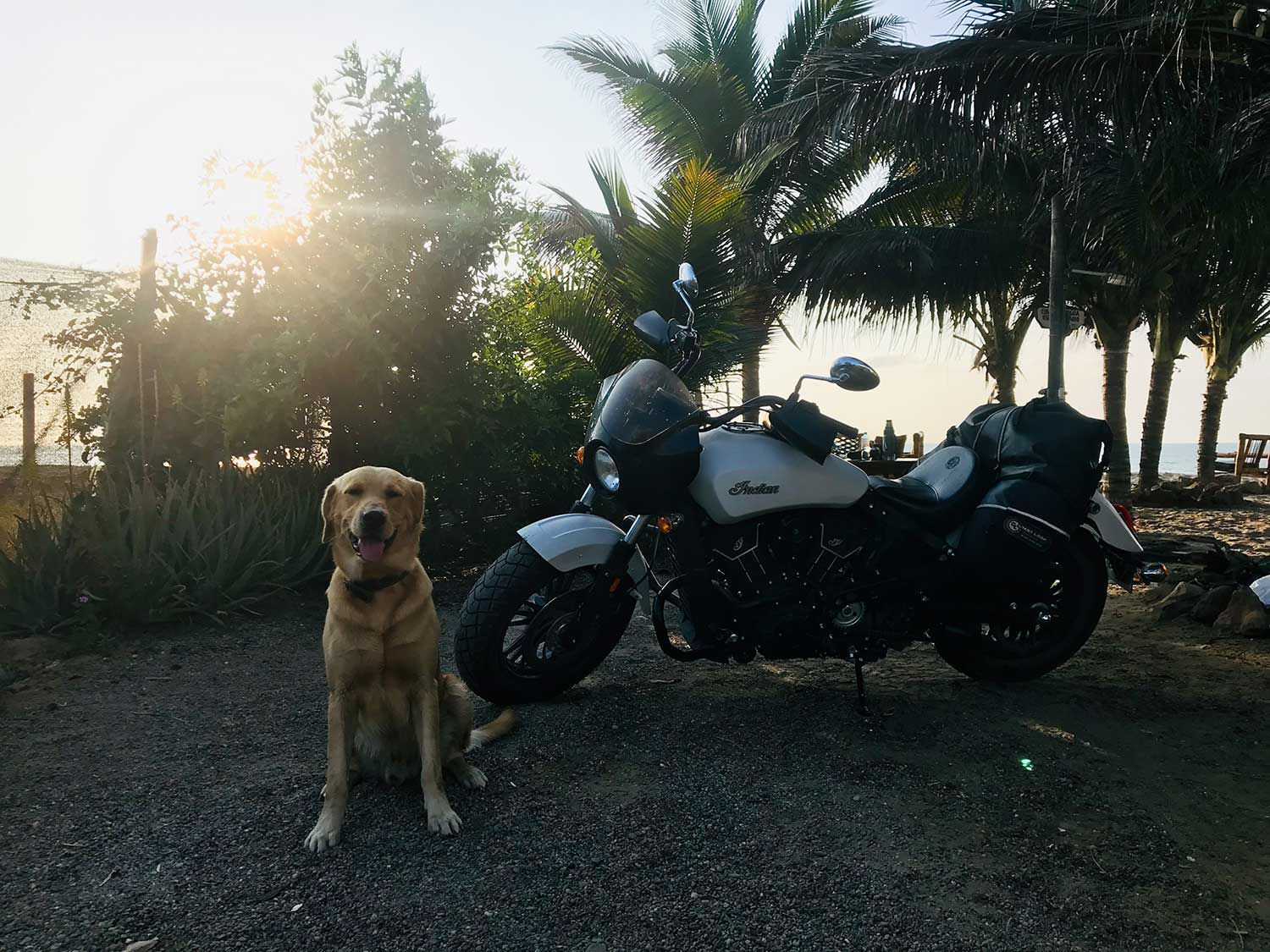 Motorcycles bring out the predator in the friendliest of Fidos. (Janelle Kaz/)

The dogs in South America are aggressive. Certain cities in Chile, such as the colorful coastal town of Valparaíso, have been overtaken by our furry companions, and they don’t take too kindly to two-wheeled visitors…especially loud ones. Beyond the cities and into the rural areas, particularly in the mountains of Peru, they hear my motorcycle coming and want to take me down.

Related: Adventure Riding An Indian Scout Sixty In The Jungles Of Peru

Descendents of predators who chased down prey, dogs are highly reactive to anything going quickly by them, stirring their innate predatory aggression. They are also territorial, and perhaps receiving positive reinforcement for chasing us out of their territory when we continue on our way. It’s possible that they see our departure as a direct result of their aggression, and thus repeat the behavior. 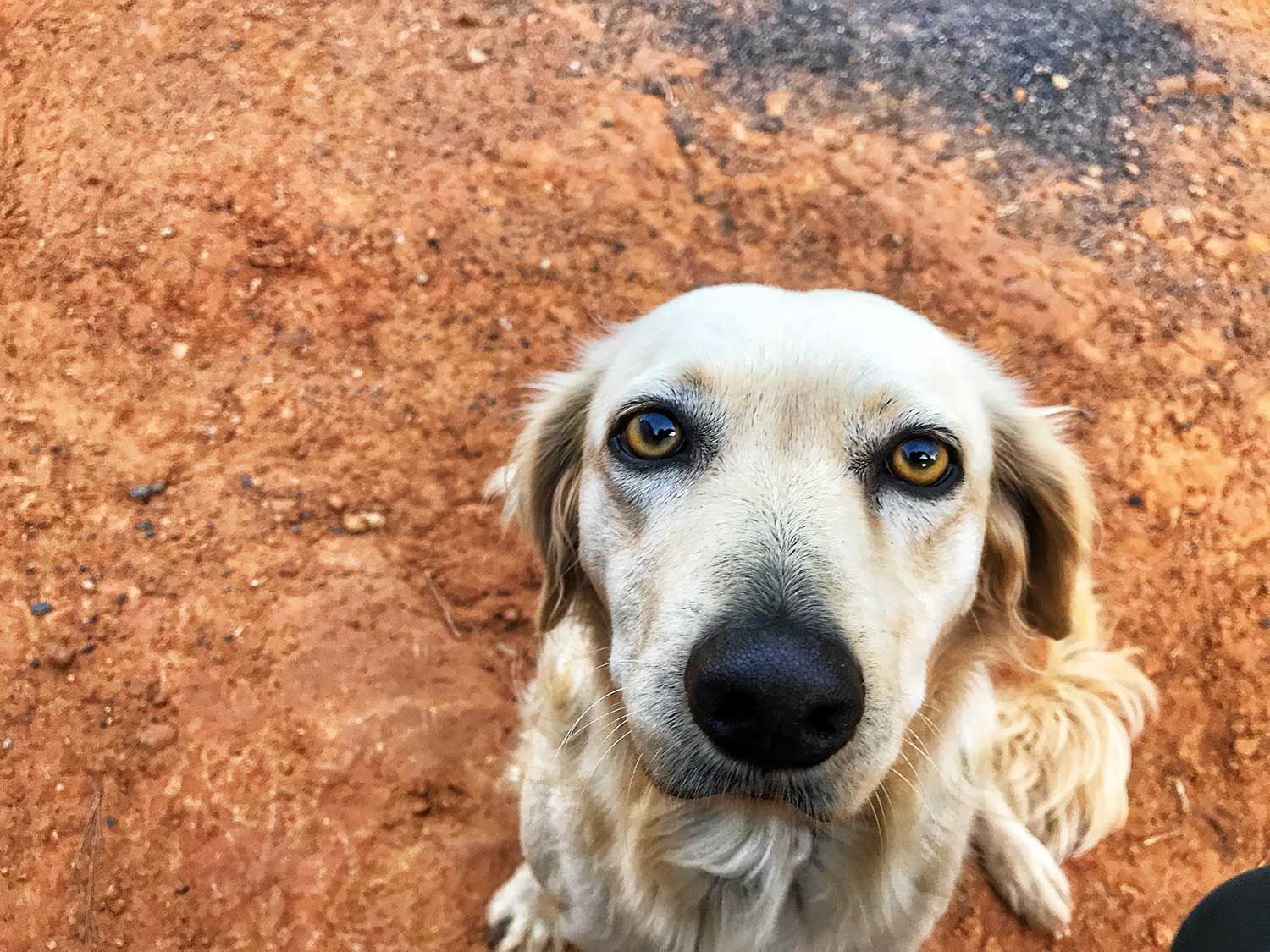 It’s funny how when you stop and turn off the bike, the dogs are friendly. As soon as you fire it back up and start moving, however, the chase is back on. Photo taken near San Gil, Colombia. (Janelle Kaz/)

If you’re like me, you can’t imagine life without the unconditional love, nonjudgment, unending forgiveness, and boundless joy of dogs. Not only do I very much not want to hit one, but I don’t want one to take me down with it on some sort of kamikaze suicide mission. Often man’s best friend just comes at me out of nowhere, exploding from the sides of the road—attacking almost directly underfoot. Other times, I catch them out of the periphery of my vision, running full speed at me like a cheetah.

Related: Riding An Indian Scout Sixty In The Sacred Valley Of Peru

Adrenaline floods my system. Once the chemical rush subsides, I notice a tremble in my hands. Sometimes their bark is so ferocious, I reflexively pull my knee to my chest, away from their snarled jaws. They’ve bitten before, latching onto the ankle, trying to tug my leg away from the motorcycle. Were it not for my tall boots, it could have been very problematic. 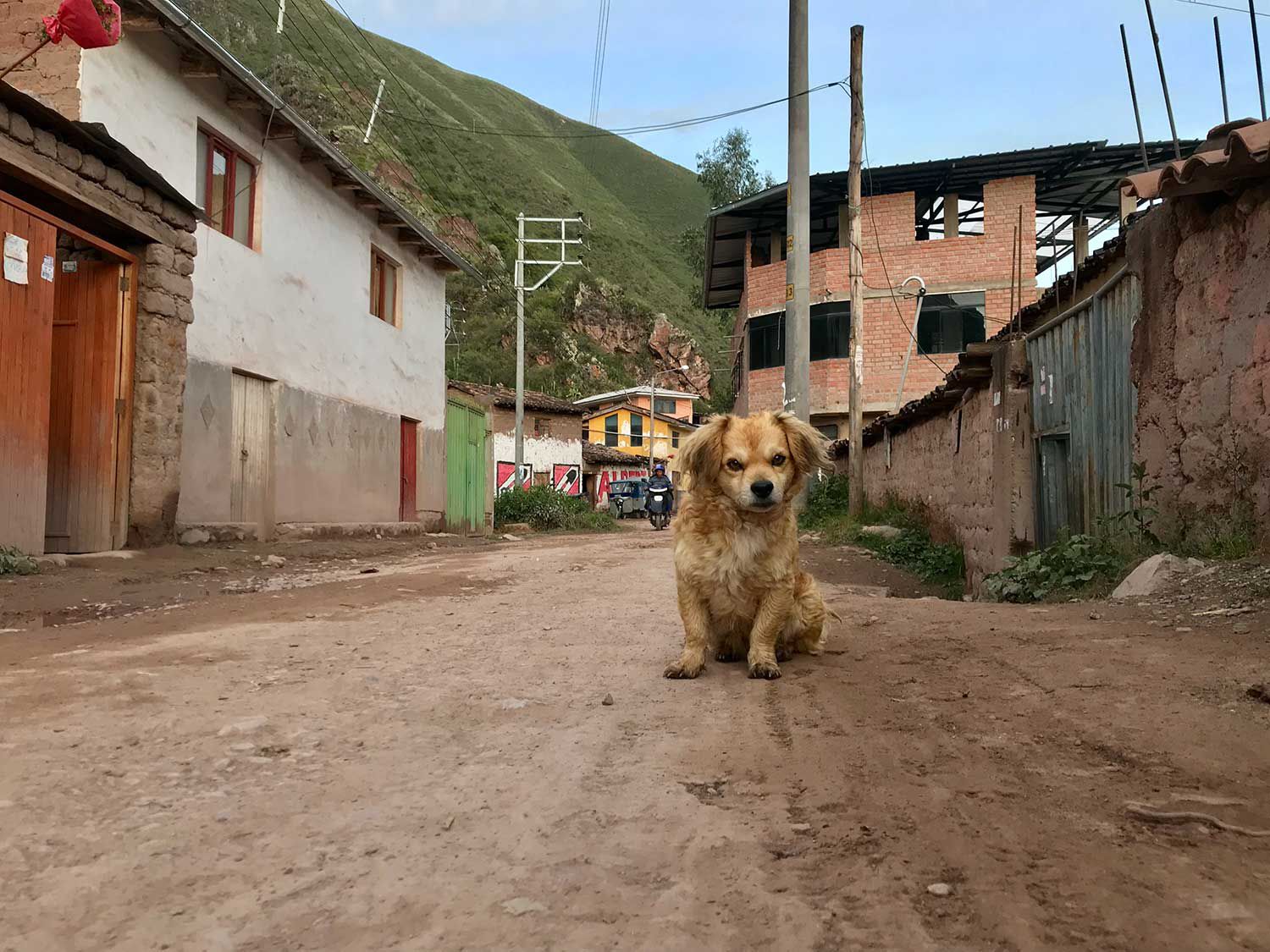 There are basically dogs on the loose everywhere in South America; there’s no avoiding this issue. Urubamba, Peru. (Janelle Kaz/)

When a dog is on the chase you have two options: Speed up and holeshot past their trajectory, or come to an almost full stop and yell at them until they back down. Depending on your speed and the location of the dog, you have milliseconds to decide which is the correct option.

Related: Riding An Indian Scout Sixty Into The Heart Of The Incas

Retrieving motorcycles is not a trick to be proud of. Photo taken in Zorritos district, Peru. (Janelle Kaz/)

• It seems that dogs in the rural Andes mountains are the most likely to chase you, especially with switchbacks where there’s sufficient time to hear you coming.

• They are almost always short-haired dogs.

• It seems cultural; if a dog at the beginning of a little town doesn’t chase you, it is likely that none of them will. Likewise, if the welcoming party aggressively chases you, you can expect all of them to do the same.

Related: The Andes To The Amazon; An Indian Scout In Cocaine Country 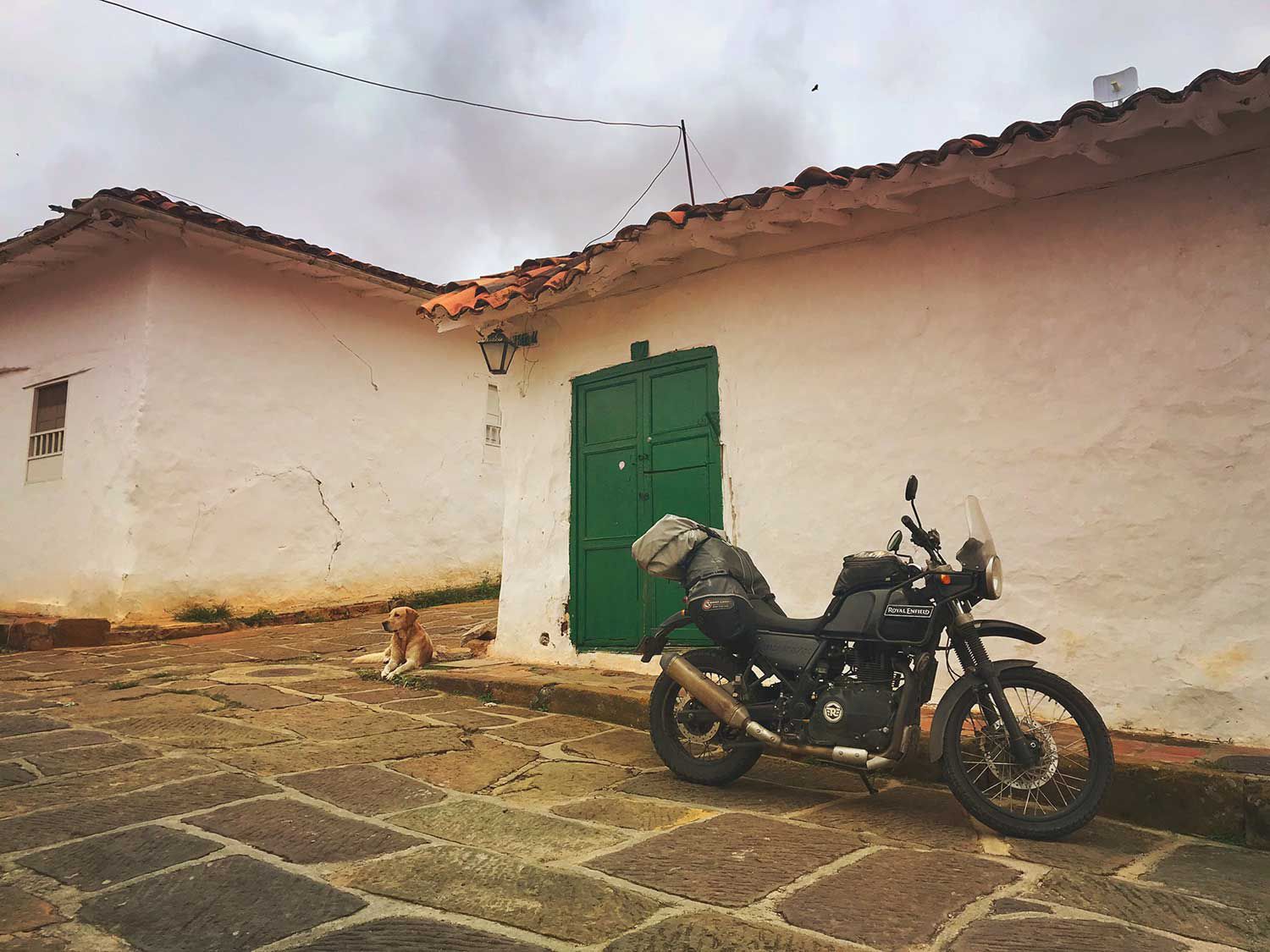 When dogs don’t chase me I try to telepathically send them a message of thanks. Barichara, Colombia. (Janelle Kaz/)

In Peru, it’s been such frequent waves of stress daily that I realized I had to change my relationship with it. These descendents of wolves are mostly doing nothing but laying around, so chasing me is probably the most fun they have all day. They love it! Thinking about what a great time they’re having has helped me feel less stressed about it. 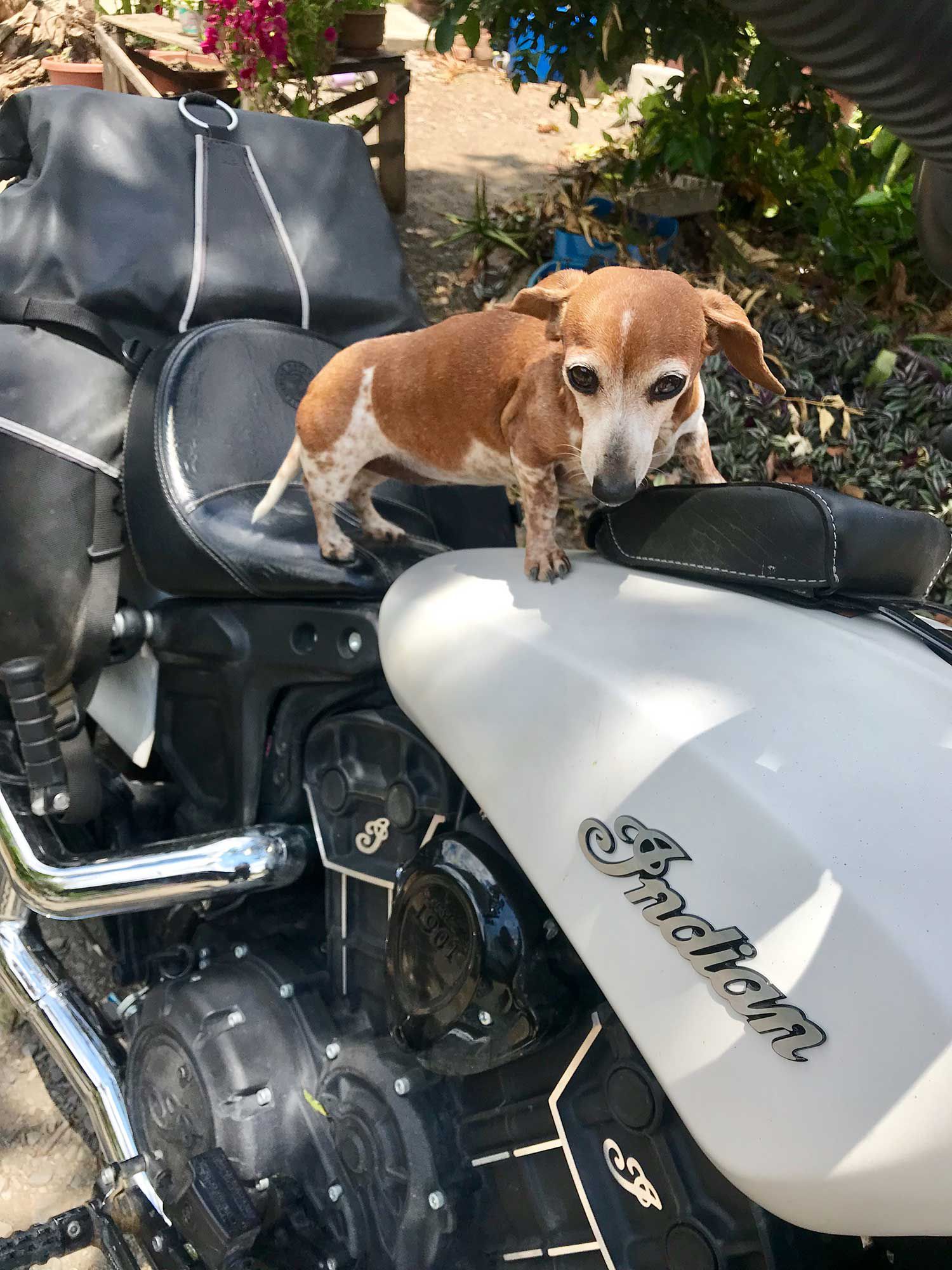 I suppose I’ve also never been chased by a wiener dog, but it seems like a comical situation. San Pedro de Vilcabamba, Ecuador. (Janelle Kaz/)

I’ve ridden motorcycles plenty while I lived in Southeast Asia, both on and off road, and was never chased by dogs like this. Perhaps the dogs are a bit more sickly there; few are well-fed. After all, you have to be relatively healthy to sacrifice the energy necessary to chase a motorcycle down the road. This is a positive thing, in my view, in regard to the overall health of my furry attackers. 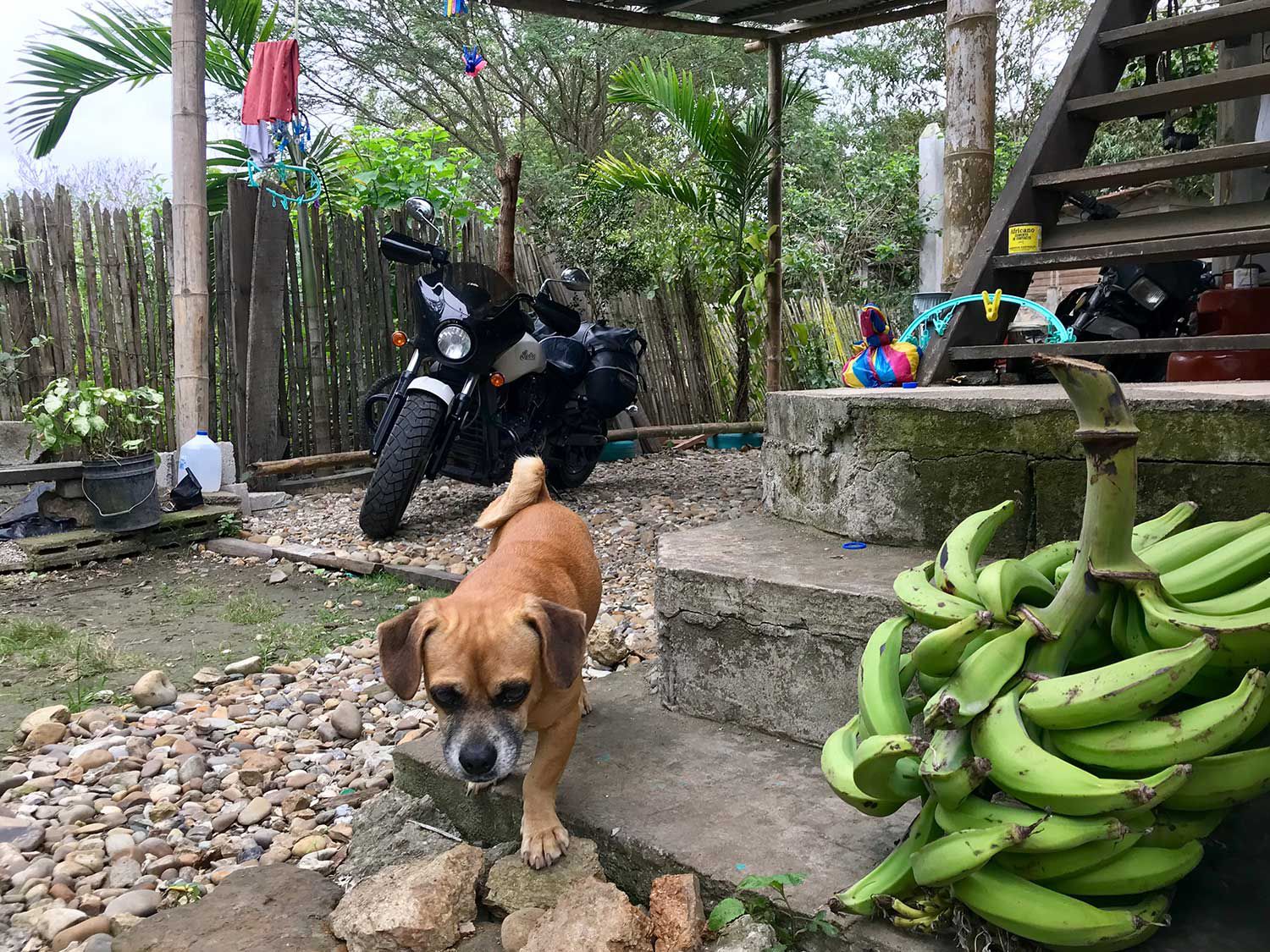 The cultural aspect of dogs chasing motorcycles is an interesting thought… They teach each other? Manglaralto, Ecuador. (Janelle Kaz/)

Another thing that helps me to feel better about it is imagining what it would be like if other domesticated animals chased me on my motorcycle. Just think if chickens, rather than panicking and running away, flew at your hands like the feathered velociraptors they are, trying to rip your fingers off. Or what if horses were known to rear up and aim for your helmet, trying to kick you over with their hooves? Imagine if livestock—sheep, goats, cows, etc.—felt threatened and tried to take out your wheels, head-butting them at full speed. How routinely terrifying it would be if feral barn cats were just waiting to pounce around every tree and fence post.

Related: Motorcycle Touring Chile—Mountains To Sea All In A Day 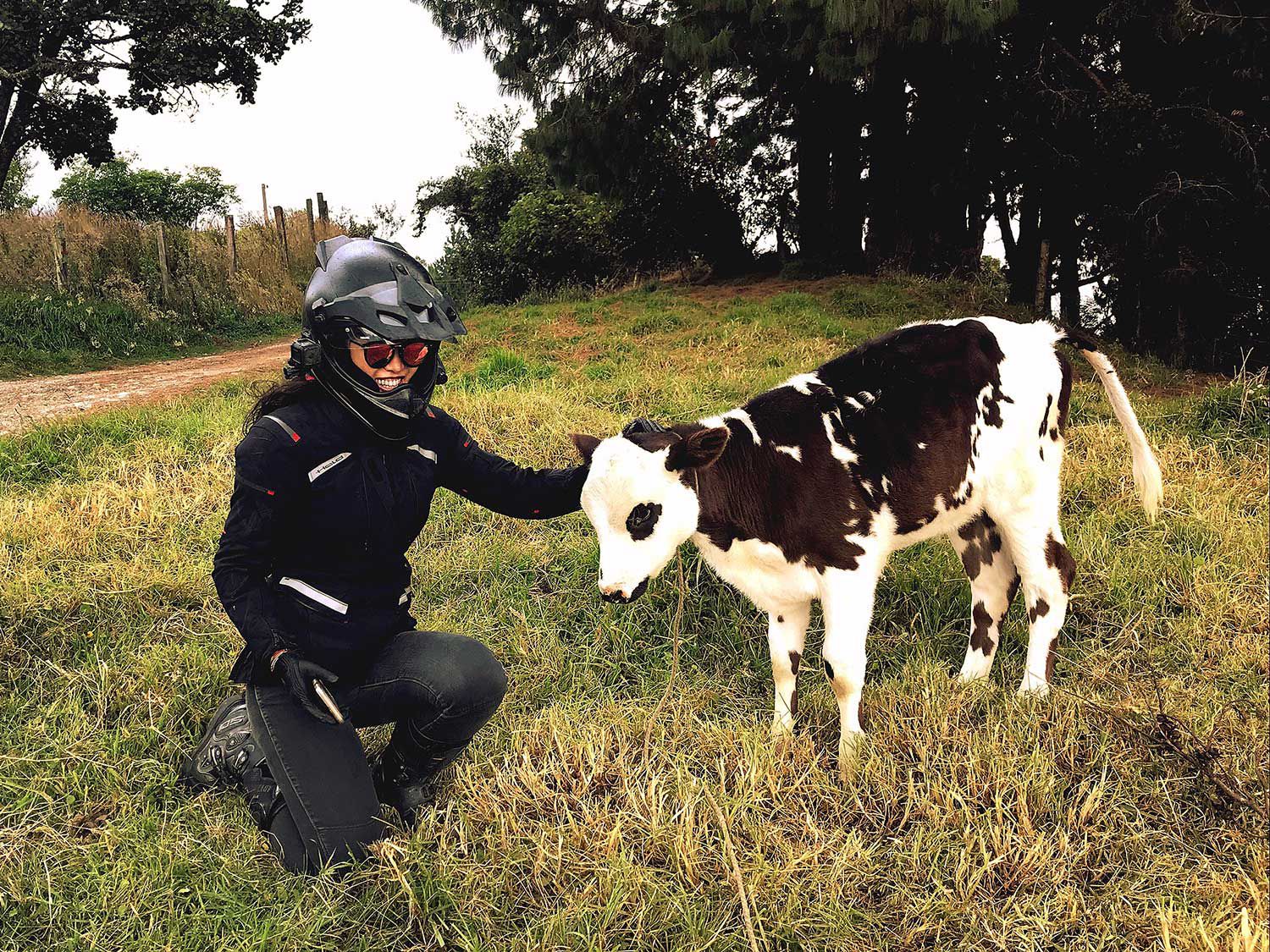 Stopping to pet baby cows and happy that dogs are the only domesticated animals out to chase us. Chingaza, Colombia. (Janelle Kaz/)

I feel a lot more thankful that it is only dogs I have to be wary of.

In dealing with aggressive dogs, I’ve found that revving the engine and/or honking the horn does nothing, if not excite them more. I have seen that when I’m at a near stop, I can yell back and have even emitted growls and barks of my own. This seems to confuse them enough to make them question attacking, or perhaps I uttered something in dog language that sufficiently diffused the situation.

Related: Riding To The Cave Of Owls On Indian’s Scout Sixty

In most situations, it seems that the dogs just want to run alongside you, barking threats. As long as you don’t hit them, you’ll be able to carry on without incidence. However, in some situations, if the dog is looking to sink its teeth into you, pepper spray is a good option to keep them at bay. I always keep some in my motorcycle jacket pocket, though I’ve never had to use it. 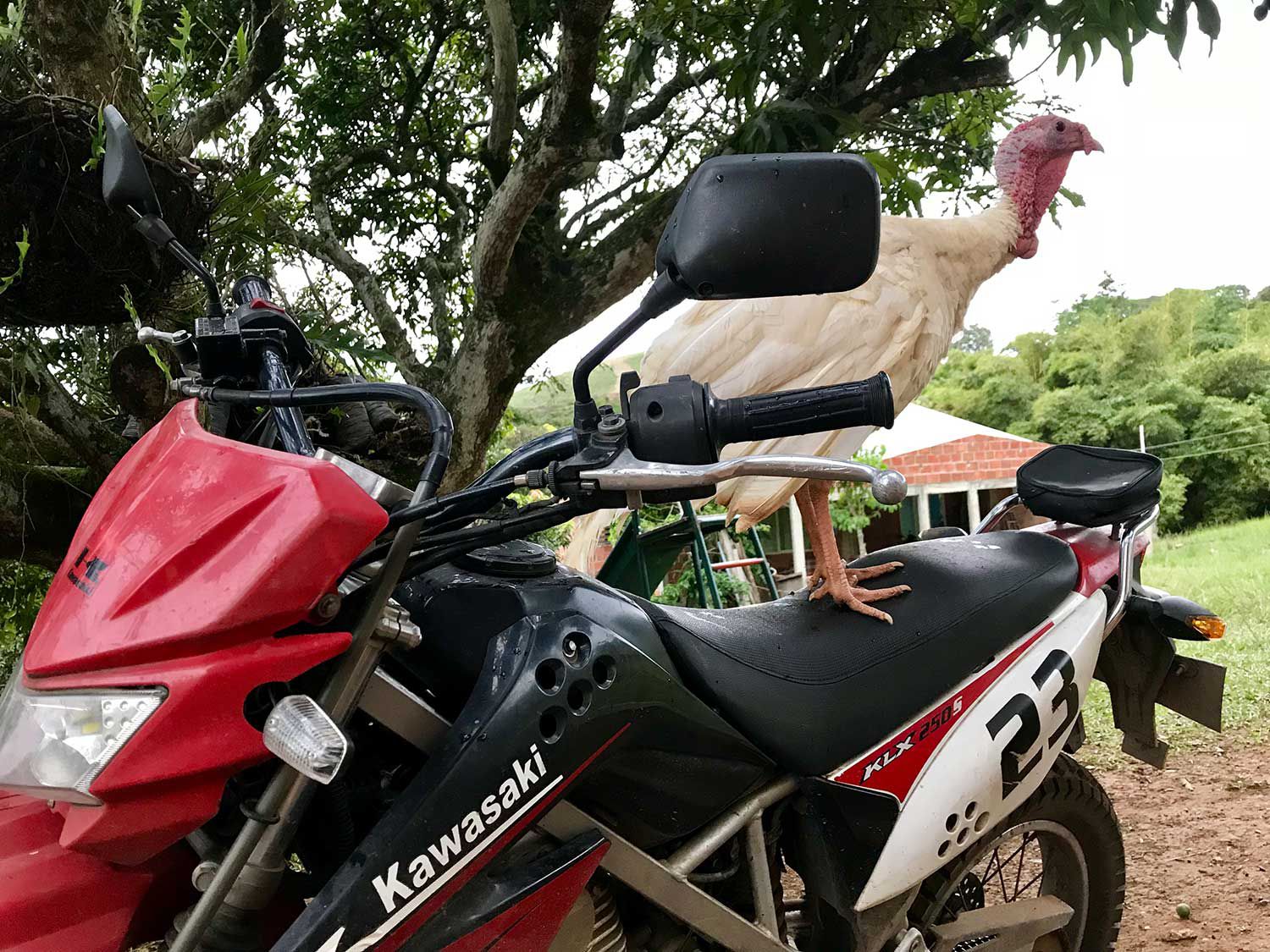 Animals are so different and all have their own personalities. This turkey, for example, protected me from an aggressive rooster. (Janelle Kaz/)

From what I’ve seen, most dogs roaming the streets in urban or rural areas know what it looks like to have something thrown at them—usually rocks. All you need to do is make a throwing gesture with your arm, rearing it back as if you’re holding something, and they’ll back down.

Related: Following Monkeys In The Clouds On An Indian Scout Sixty

The words from Mark Twain, “It’s not the size of the dog in the fight, it’s the size of the fight in the dog,” applies to us as well. It is important to assert yourself in situations where the dog is contemplating pursuing you. Yelling in your deepest voice can be effective, or consider carrying an air horn. The loud burst of noise coming from the air horn doesn’t need to be aimed with the same accuracy as the pepper spray, and is greatly intensified by dogs’ acute hearing. 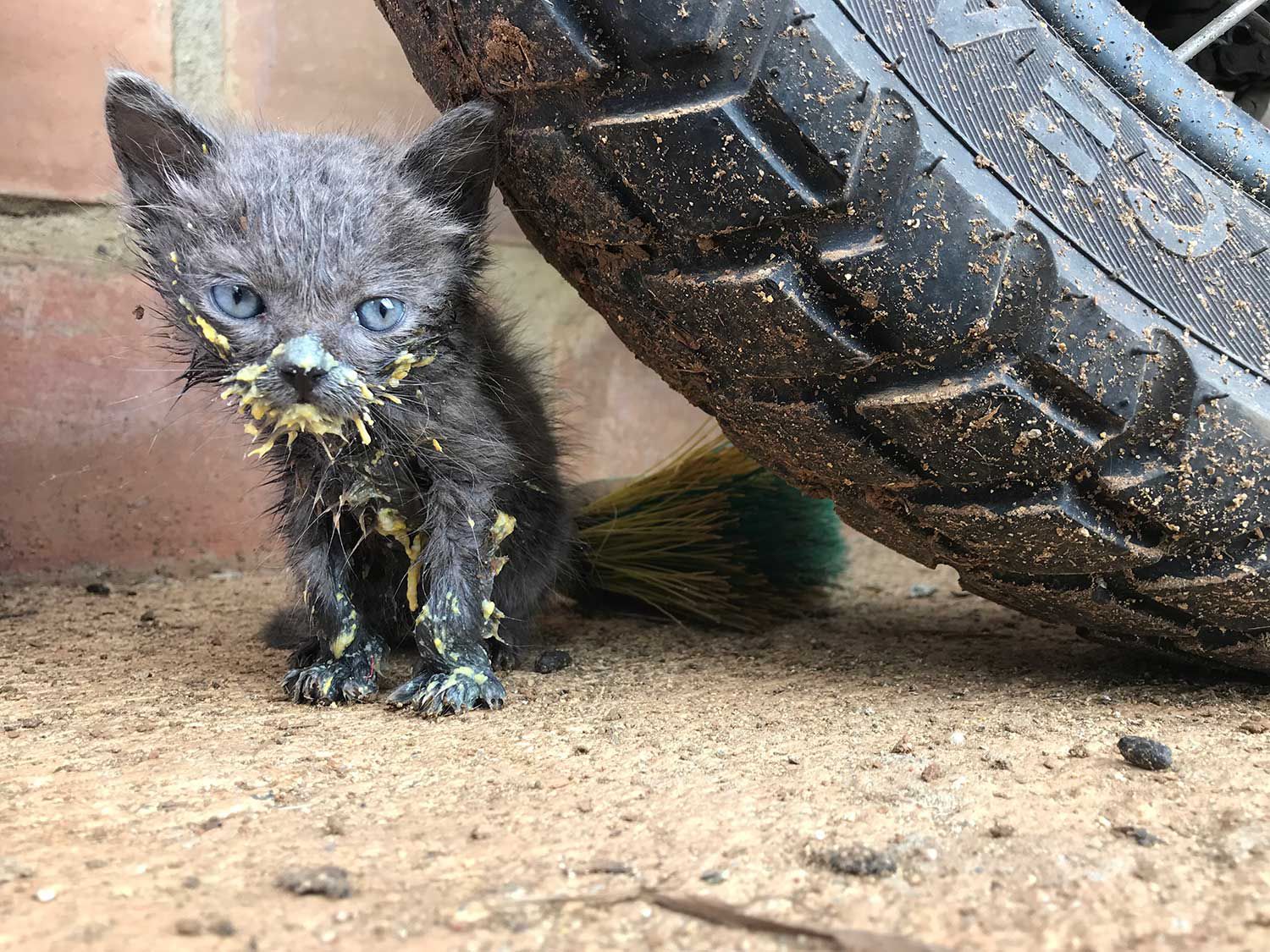 Being chased by dogs on a bike in South America is inevitable, but there are a variety of options to deal with it. I found changing my psychological outlook on the situation most helpful, since the stress and anxiety of those situations seemed to affect me longer than the situations themselves.

If slowing down and coming to a near stop is the safest choice, which it often is on Peru’s mountain roads, opening the helmet visor and yelling at the dogs almost always keeps them from pursuing further.

There’s only one kind of dog I’ve never been chased by: a hot dog. If it’s hot out, such as in the stifling equatorial heat, dogs don’t care about you at all; they’re just going to lay there and pant. 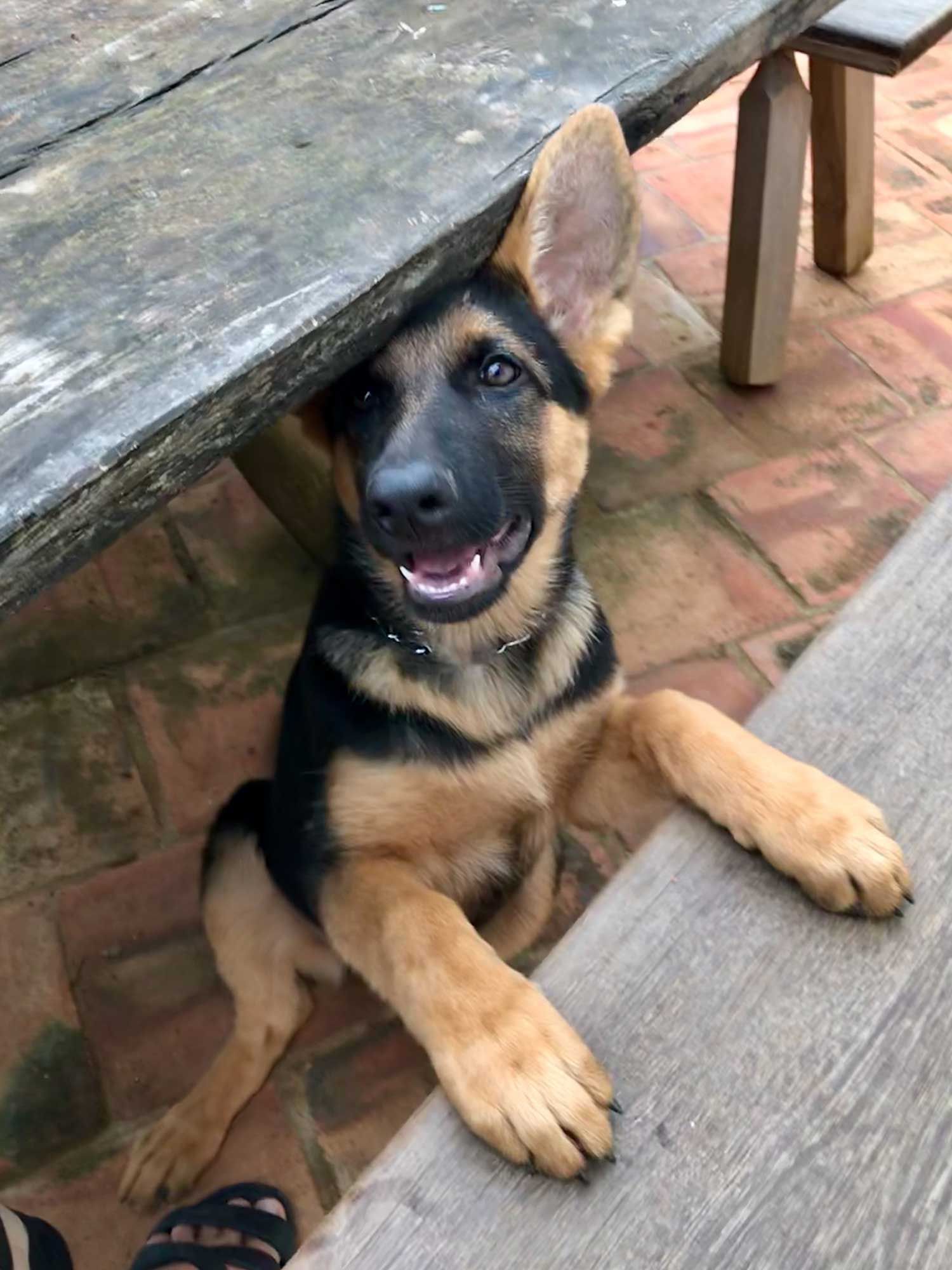 Being thankful that the dogs were at least healthy enough to chase after me, and having a great time doing so, alleviated a bit of anxiety. Barichara, Colombia. (Janelle Kaz/)
Post Views: 87
Tags: bike, motorcycle, news, reviews